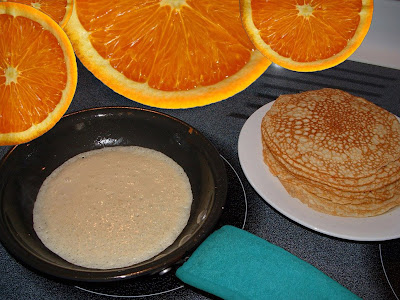 Looking through my diary that I was writing when I was staying in Leiden, Holland, quite a few years ago, I found this forgotten recipe that I picked up from a colleague (named Suzette!) who was working in the same laboratory that I was. I remember with fondness my time in Leiden and the taste of these delicious pancakes contributes to the sweetness of the memory.

Method
Beat the egg and add the milk gradually alternating with the melted butter. Sift in the flour and mix well to form a smooth batter. Add the vanilla essence, stir well and put aside to rest for about an hour while preparing the filling.

Heat the marmalade in a pan until smooth. Add the lemon zest and the orange segments. Warm until the juice of the oranges is half absorbed, stirring gently so that the mixture does not stick to the bottom of the pan. Remove from heat and add the liqueur. Heat the butter in a skillet and drop enough batter on it to cover the bottom of the pan in a thin layer. Cook on one side and then flip to cook the other side. Remove and repeat with the other pancake. Spoon the filling into the pancakes and roll up, laying each one aside.

Heat the pancakes in a microwave oven until hot. Place each pancake on a dish, dust with icing sugar and pipe some whipped cream peaks on the side. Decorate with the mint and pour some cherry syrup on the empty part of the plate so that the pancake is surrounded by the syrup.
Posted by Intelliblog at 01:40