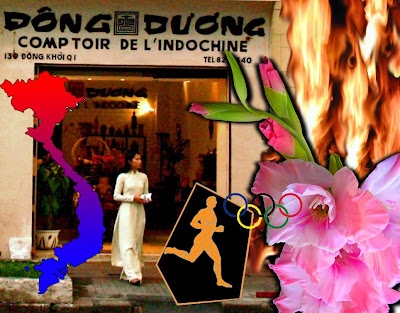 “When the mind is thinking it is talking to itself.” - Plato

The gladiolus, Gladiolus spp, is the birthday flower for this day. The name is derived from the Latin gladius, meaning “sword”, in reference to the sword-shaped leaves. The gladiolus symbolises readiness for battle and in the language of flowers means: “You pierce my heart”. Some famous people born this day: Georg Böhm, German composer (1661); Liliuokalani, last queen of Hawaii (1838); Henry George, economist (1839); Wilhelm Ostwald, Nobel laureate (1909) chemist (1853); Allan Drury, author (1918); Jimmy Connors, tennis player (1952).

On this day in 490 BC, supposedly Phidippides ran the first Marathon to announce the victory of the Greeks over the Persians in Marathon, Attica, Greece. He dropped dead from exhaustion promptly afterwards. The tradition of running the Marathon in the Olympic Games is a commemoration of that historic victory and the original fatal run. There is quite a controversy surrounding this claim and one may investigate it here, and here.

In 1666 on this day the Great Fire of London started and lasted for 3 days. Everyone knows the Great Fire of London started in a baker's shop in the aptly named Pudding Lane, but was it an accident or a “pernicious Papist plot” as people wildly proclaimed? Following decades of political and religious upheaval, the restoration in 1660 of the Protestant Charles II ensured that suspicion lingered around republicans and Catholics alike. With the country also at war with the French and Dutch, paranoid xenophobia (a familiar English trait) was widespread.

Fires in London were very common, given the capital's largely timber construction. Yet for years there had been warnings of London's total destruction by fire: In 1559 Daniel Baker had predicted London's destruction by 'a consuming fire'. In April 1665, Charles had warned the Lord Mayor of London of the danger caused by the narrow streets and overhanging timber houses. Furthermore, a long, hot summer had left London dry and drought had depleted water reserves.

Yet the greatest fear among Londoners was not fire. Plague had killed over 68,000 people in the previous two years. Although Charles II had returned to Whitehall in February 1666, London remained unsafe, with death carts still commonplace. What worried inhabitants most was the strong east wind. This, combined with the dry, dusty air, was known to be particularly effective in carrying plague. It would prove as equally efficient as fire in taking lives…

It is the Proclamation of Independence Day in Vietnam today (since 1954). Vietnam was part of French Indochina and only gained its independence in 1954. Decades of internal discord, civil war mixed with external interference and tragic armed conflicts have hampered its development until recently. The country has an area of 330,000 square km and a population close to 70 million people. It stretches along the South China Sea down a mountainous backbone and encompassing two river deltas: The Song Hong in the North and the Mekong to the South. Rice, coffee and rubber are the main crops with reserves of coal, anthracite, lignite, tin, iron ore and extensive rainforests beginning to be developed. The climate is monsoonal with moderate rainfall. The capital city is Hanoi with other major cities including Ho Chi Minh City, Da Nang, Hué, Rach Gia, Nha Trang and Haiphong.
Posted by Intelliblog at 23:27