PARIS IN THE SPRING... 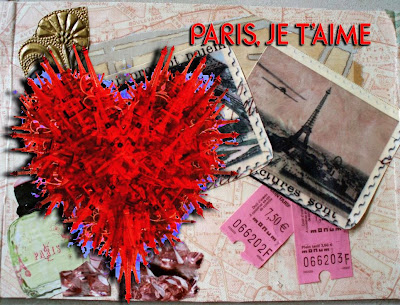 “The magic of first love is our ignorance that it can ever end.” - Benjamin Disraeli

It is the first day of calendrical Spring in the Southern hemisphere today and the day was punctuated with some bursts of sunshine, gusts of wind and tussles of gray clouds flitting across the skies. Changeable weather is a hallmark of Melbourne, and perhaps not more so than in Spring when we experience rather a lot of it. The garden is blooming with fragrant blossoms: Freesias, narcissi, hyacinths, jonquils, stocks, leptospermum. Tulips, primroses, anemones, ranunculus and plum blossom colour the grey days with splashes of colour. Showers alternating with sunshine, cold and warm in succession, blue skies and gray. Whatever the weather says, Spring is here.

At the weekend, there was a clutch of household duties, work activities and chores to get through, but nevertheless on Sunday we managed to watch a movie. It was the 2006 Gallic portmanteau film, “Paris, Je T’ Aime” the collective work of 18 different directors who each directed a 5-minute-or-so segment of the movie. The 18 stories are little cameos - independent, but interdependent and all having the same theme: Love, and what’s more, Love in Paris. There are some great actors and actresses obviously having a wonderful time, gallivanting through Paris neighbourhoods. Gerard Depardieu, Fanny Ardant, Bob Hoskins, Ben Gazzara, Marianne Faithfull, Juliette Binoche, Nick Nolte, Li Xin, Elijah Wood, Natalie Portman, Gena Rowlands, etc… Various directors go through their paces and include The Coen Brothers, Wes Craven, Alfonso Cuaron, Vincenzo Natali, Oliver Schmitz, Alexander Payne, Gus Van Sant, Gurinda Chadha.

Some stories are fantastic and marvelously inventive, some funny, some poignant and sad, others wistful and poetic, some downright silly. Nevertheless, most of them are well crafted and beautifully acted. There are vampires and tourists, young and old people, mimes and children, lovers and would-be lovers, French and non-French people. Various forms of love are explored and towards the end we see some characters from some stories fleetingly interacting. However, one of the strengths of the movie is the epigrammatic and self-contained characterization that is so well-handled by most of the screen writers and the directors. The success of this film is to be emulated by a film that is being made now, “New York, I Love You”, the collective effort of 12 different film-makers, producing – you guessed it – a portmanteau film of 12 stories about love in New York…

“Paris Je T’ Aime” is a delightful film to watch, even though one cannot enjoy equally all of the stories one sees. The great variety that is spread there for one’s delectation is like a banquet that one can sample at will, nibble here and there and reach satiety very pleasantly.
Posted by Intelliblog at 23:21