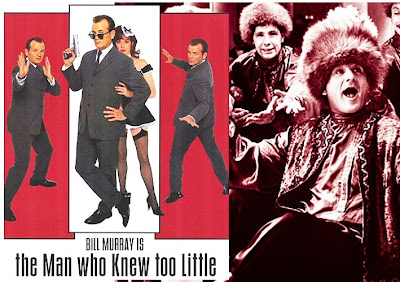 “God is a comedian playing to an audience too afraid to laugh.” – Voltaire

Today I was in Adelaide for work. Commuting to a different city for a day is rather tiring, but one can achieve quite a lot if the scheduling of the appointments has been organized well. And this was the case today. Rushing from one place to another, from a Minister’s office to a Government Department, from a College to a University, it was hectic and we had to battle with the weather as Spring showers were definitely the order of the day. Nevertheless, all went well and I managed to get home at 8:30 pm…

Yesterday we watched an old film, but one that we had missed when it first came out. It was “The Man Who Knew Too Little” (1997) with Bill Murray. Jon Amiel directs this spy-thriller spoof with his tongue lodged firmly in his cheek and the laughs are plentiful. The plot concerns an American, Wallace Ritchie, who flies to England planning to spend his birthday with his brother, James. James has business guests coming over and must find something to occupy his brother until dinner's over. Conveniently, James sees an ad for the "Theatre Of Life," which promises to treat the participant as a character in a drama staged in a neighbourhood and signs up Wallace for the immersion performance. Wallace decides to participate, but unfortunately he gets in the way of a real spy assignation and becomes tangled up in a plot to kill Russian dignitaries on the eve of the signing of an important peace agreement. For him, it's all an act and he has great fun being a participant in the drama, however, to the men who want a second Cold War, Wallace is an agent who must be “liquidated”.

Yes, it’s corny and conventional in its gags, and the end is predictable, but nevertheless the light fun is conducive to a few laughs and one may spend a pleasant 90 minutes or so enjoying the antics of funnyman Murray. One of the highlights is his Russian Cossack dance. Richard Wilson (from the funny UK TV series “One Foot in the Grave”) has small funny part and the romantic interest is provided by Joanne Whalley, rather ably.

Definitely not highbrow, not witty or very intelligent, but quite enjoyable as a bit of escapist fluff, good for a few laughs. If you do not enjoy Bill Murray’s brand of humour, then obviously avoid this flick.
Posted by Intelliblog at 02:14