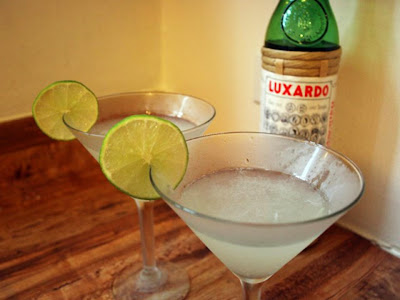 The Daiquiri cocktail was originally conceived as a way to cool off under the hot Cuban Sun, and it’s been the standard of outdoor refreshment ever since its conception. The classic Daiquiri, as originally invented, was hand shaken and never frozen or blended with fruit.
In 1898, in the small mining town of Daiquiri, Cuba, a mining engineer by the name of Jennings Stockton Cox invented a cocktail to help boost his men’s morale during the hot summer months. Jennings was compensated with a generous salary along with a monthly gallon of his favourite Bacardi Rum. After experimenting with local ingredients he showed his men how to combine lime juice, sugar, crushed ice and Bacardi Carta Blanca to create what he later named the Daiquiri.

This cocktail still remains the most popular way to taste the spirit of old Havana. Its exotic taste and versatility make it a modern classic.

Method
In a cocktail shaker mix the cracked ice, lime juice, sugar and rum until a frost forms. Strain into a chilled martini glass and add a lime twist as a garnish.

Enjoy your weekend!
Posted by Intelliblog at 02:06