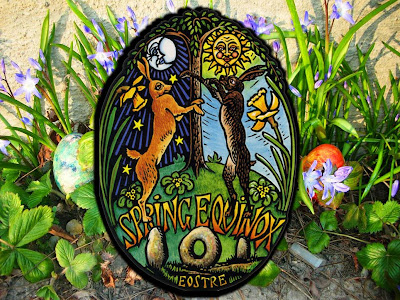 “There is no reality except the one contained within us.” - Hermann Hesse

Astronomically speaking, today is the first day of Spring in the Southern hemisphere as yesterday we had our vernal equinox. On this point of the earth’s trajectory around the sun, the sun is situated at a point directly above the equator at noon. Night and day are equal and beyond that the days begin to lengthen and the nights to become shorter as we progress towards summer. In the Northern hemisphere, the opposite occurs of course, as the autumnal equinox heralds autumn and the shortening of the days and lengthening of nights as winter approaches. In Japan the autumnal equinox is termed Higan, meaning the “other shore”, implying heaven. Buddhists will pray in temples and in cemeteries for the souls of the dead in ceremonies reminiscent of All Souls’ Day.

The day today was more wintry than spring-like in Melbourne, with rain, cold and grey skies giving us the last taste of winter before he leaves us. At work I was quite busy, catching up after my time away from the office – work tends to accumulate when one is away and it takes some time before one catches up. I had a record number of emails yesterday and today and I tried to deal with all 200 or so of them, but it was an impossible task. I had to answer the urgent ones and the rest remained to be dealt with later. A couple of meetings, several memos to write and the day ended before I quite knew it.

Today is the national day of Armenia, which is the smallest of the 15 republics of the former USSR. It gained its independence in 1991. It is about 30,000 square km in area with a population of 4 million people. It is East of Turkey and North of Georgia. The capital city is Yerevan with other main centres being Karaklis, Kumayri and Kamo. It is a mountainous, landlocked country with small but fertile regions of arable land. The main industry is machine-building with chemicals and textiles also contributing to the economy. Farming and raising of sheep, goats and cattle is also important.
Posted by Intelliblog at 22:59