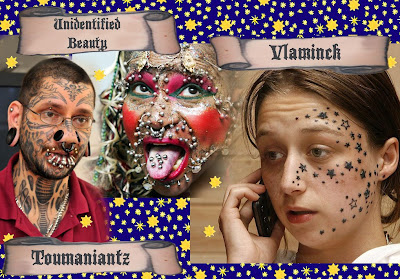 “In youth and beauty, wisdom is but rare!” - Alexander Pope

I don’t know if you kept up with the story of Kimberley Vlaminck of Belgium and the furore she caused when she accused a tattooist of “ruining” her face by tattooing 56 stars on it after she allegedly asked for only three… The 18-year-old Vlaminck is suing the tattooist Ruslan Toumaniantz, claiming she had asked him for only three stars - and had fallen asleep during the procedure, waking up to a “nightmare” in her Belgian hometown of Courtrai. The tattooist said that Kimberley Vlaminck had absolutely agreed she wanted 56 stars tattooed on the left side of her face. However, he said that he would help pay for them to be removed. This, because Vlaminck had claimed because Toumaniantz is Rumanian and spoke only Flemish, he didn’t understand her when she spoke to him in French (which with Flemish, is the other official language of Belgium) and English.

The girl said last week: “It is terrible for me. I cannot go out onto the street. I look like a freak.” She also mentioned that her father had become furious when he had seen her on her return home. The family was going to sue Toumaniantz for the cost of having the tattoos removed by laser treatment. The story gave rise to intense media interest and it circled the world. Such interest is fuelled in part by the increased number of young people that undergo various forms of body mutilation and modification – piercings, tattooing, cosmetic surgery, implants, etc.

Ms Vlaminck has admitted today that she has been lying. She confessed that she had asked for 56 stars, and not only did she not fall asleep, but that she had loved the result. When she got home and her father became furious, she said that she had fallen asleep and that the tattooist had made a mistake. This apparently mitigated somewhat her father’s wrath.

Toumaniantz (who himself is covered in tattoos and piercings) has withdrawn his offer to help pay for the laser removal of Vlaminck’s tattoos and, wisely, has indicated that from now on, he will obtain a written and signed consent form from his client before he embarks on their embellishment.

This is story that is disturbing on many levels. Firstly, I shall divulge and then dissociate completely my own views on body modification so that I shall not prejudice my case. Piercings and tattoos are not my thing. I do not wear jewellery of any kind and I can barely tolerate a watch on my wrist. To even think about a piercing makes me wince and I would not consider having any tattoo. However, I believe that mature people who wish to modify their body can do so, full well knowing the consequences of such procedures. It is very much a case of “I disagree with you, but I defend your freedom of choosing to do what you wish with your own body”.

The body modification that is being carried out more and more by minors, by teenagers I find quite worrying. They are being influenced (while quite vulnerable) by family, friends, peers, fashion and this influence can have harmful consequences. Firstly, unless the piercing or tattoo is performed under suitable conditions by a reputable practitioner, there is the very real risk of infection: Hepatitis, HIV, etc etc… Secondly, even if the body modification is carried out under strict aseptic conditions, there are all sorts of complications that may occur: Secondary infection, gangrene, excessive scarring, keloid, damage of underlying tissue, interference with physiological function, etc, etc… Thirdly, the body modification that may have been undertaken in a fit of youthful enthusiasm or inebriated bravado, may on reflection prove to be a regrettable decision. Furthermore, as the young person grows into adulthood, the body modification may prove to be an embarrassment or inappropriate in an adult context.

The story is disturbing for me because the young woman felt she could get away with accusing an innocent person as being responsible for a decision she herself had made. She felt no compunction in lying brazenly and shifting the blame from herself to a “foreigner” who could not “speak her language and hence did not understand her”. Add to the deception and dissimulation, blatant racism. This is a very silly young woman, completely immature and childish in her outlook. The tattoos are an example of the decisions she may be making in her life for which she has no responsibility or real understanding.

The decision by the tattooist to give half the money required for the removal of the tattoo (even though he full well knew the girl was lying) has a certain nobility and gentlemanly charm. A gracious gesture showing maturity and responsibility. The withdrawal of the offer once the girl confessed, a justifiable business decision.

We have become obsessed in our society with instant gratification, satisfaction of the basest instincts, the quest for momentary pleasures, the selfish pursuit of personal goals at whatever cost. Peer acceptance based on superficial criteria is one of the measuring sticks of “success” and “popularity”. Decisions are made instantaneously with no real thought of the consequences or their impact on other people. We place value on things that are worthless and neglect the real treasures.

I wonder what made Vlaminck confess the truth? A sudden upswelling of remorse and attack of conscience? I don’t think so. My gut feeling is that the father divined the truth and pressured the girl into admitting her mistake. What a sad and pitiful story. What have we evolved into? If this is civilisation, then what is primitive humanity? We have popular music that is like some primordial noise made by cannibals before a feast. We dance nowadays like monkeys jumping up and down on trees. We value baubles and gold above and beyond all else. We kill and maim and annihilate our peers like some primordial pre-humanoid intent on dominating its fellows. We decorate ourselves with piercings and tattoos like some ancestral savages. This is decadence…
Posted by Intelliblog at 01:12