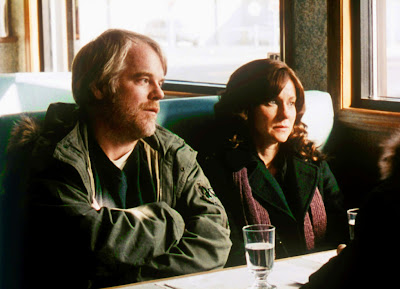 My grandfather always used to say: “Parents can look after their ten children, but the ten children can’t look after their two parents”. I guess this is a fact of life in so many cases because just when the parents get old and decrepit and need care, their children have their own children and need to look after the next generation. However, in many cultures the extended family tradition is still alive and well and is a way that family members can all live together and support each other across the generations. In most Western countries, the nuclear family has all but made the extended family obsolete and a relic of the past. This creates numerous problems and leads to situations that are depicted in the film that we watched at the weekend.

The Tamara Jenkins 2007 film “The Savages” starring Laura Linney, Philip Seymour Hoffman and Philip Bosco explores the way that two children (Linney and Hoffman) cope with their dementing father (Bosco) who needs to be put into care. The situation is complicated by the preexisting relationship (or rather lack of it) that these two children had with their parents. The mother abandoned them when young and their father was anything but a caring parent. However, the blood ties are strong enough for these two scarred individuals to want to “do the right thing”.

The film works on many levels. The story is everyday and trite in many ways, but because of this, it reeks of humanity and appeals to the viewer because one can identify with characters and situations in many ways. There is subtle humour, pathos, humility and sadness in this movie and one can see it and become embarrassed because there are many venial sins depicted that could be on any one of our consciences. This wasn’t a film that moved me particularly, although I felt involved and there was a great sense of pity that I felt for all the characters.

The daughter is a thirty something relief worker who is trying to get a grant to write a play. She is having an affair with a married man fifteen years her senior, lies about unimportant things and downs pills of all sorts. Her reactions are emotional, a little unstable, motivated by the love she has been denied when growing up. The son is older, apparently more down-to-earth, ostensibly more sensible and less inclined to emotional outbursts, but nevertheless conceals a soft centre and is not coping with his relationship with a Polish woman whose visa has run out and get out of the country.

The father is perhaps the most enigmatic of the characters as he is the one who has the least to say, but is perhaps the one we wished said the most. He is played beautifully by Philip Bosco and he acts as the catalyst for the great changes that will occur in his children’s life after the interaction they have with him in the twilight of his life. The supporting role of Lenny (the daughter married lover) played by Peter Friedman is an excellent casting choice and to a certain extent this character acts as a fulcrum for the changes that happen later in the film.

Tamara Jenkins (who also wrote the script) directs form the heart and gets everything right in this film. The chemistry amongst the cast is great and the cinematography very good. The stark contrast between retirement-ville in Arizona with its manicured lawns and plastic-like shrubs, and the cold, wintry, stark New England landscape is symbolic and poignant. The music provides a good support for the action, is often a bridge or transition and a reminder of the former times that the father is regressing into. Overall, a very satisfying film, well worth seeing.
Posted by Intelliblog at 22:07