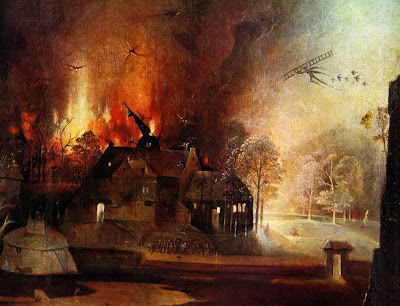 The devastating fires in Attica, Greece, just to the north of Athens have been burning since Friday evening and have reduced to ash forests and gutted properties. The fire broke out late on Friday in a village about 40 km (25 miles) northeast of the Greek capital and, fanned by strong winds, spread to neighbouring villages and northern suburbs of Athens. Greek authorities declared a state of emergency in eastern Attica on Saturday where the flames seared about 12,140 hectares of forest, farming fields and olive groves.

The fire brought back memories of 2007, when Greece's deadliest wildfires in living memory raged for more than 10 days on the Peloponnese peninsula and Evoia island, killing 65 people. Fortunately, until now, there have been no deaths with these fires, but authorities fear for the worst as residents are frantically trying to stop the flames from reaching their houses with garden hoses and tree branches.

A detail from Bosch’s central part of the “Triptych of The Temptation of St Anthony” (painted 1505-06), Oil on panel (Museu Nacional de Arte Antiga, Lisbon) is apt for this fiery Sunday. A burning village illuminates the dusky background, probably a reference to the disease of ergotism or "St Anthony's Fire", whose victims invoked the name of St Anthony for relief.

Hieronymus Bosch (ca 1450-1516) was Netherlandish painter, named after the town of 's-Hertogenbosch (Bois-le-Duc) in northern Brabant, where he seems to have lived throughout his life. His real name was Jerome van Aken (perhaps indicating family origins in Aachen, Germany). Bosch married well and was successful in his career (although his town was fairly isolated, it was prosperous and culturally stimulating). He was an orthodox Catholic and a prominent member of a local religious brotherhood, but his most characteristic paintings are so bizarre that in the 17th century he was reputed to have been a heretic. About forty genuine examples of Bosch's work survive, but none is dated and no accurate chronology can be made.
Posted by Intelliblog at 01:38