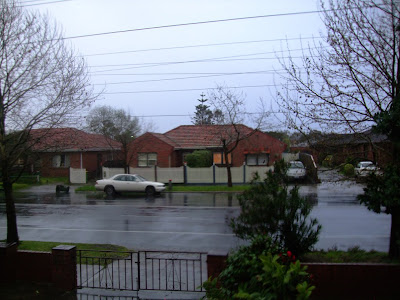 “Many a man curses the rain that falls upon his head, and knows not that it brings abundance to drive away the hunger.” - Saint Basil

A storm for Melbourne today. The weather bureau and the State Emergency Service have been warning resident of our city since yesterday about the cold front that would move through Melbourne at approximately 5:00 pm on Tuesday afternoon. There were all sorts of dire warnings, with winds predicted to reach speeds of 120 km/hr in some parts of the state. Commuters in the City (of which I am one!) were warned to leave work early in order to not have their schedule disrupted by service interruptions to trains and trams.

The temperatures were quite low today compared with the past two weeks and our building was frigidly cold this morning when I got to work just after seven. There were problems with the heating, apparently, but fortunately I have a small heater in my office and it was able to warm it up once I closed the door. I had to pop out to the bank at lunchtime and the wind was chilly. However, in the afternoon, the sky was quite blue and the sun was shining, although it was still cold. Some people began to laugh and joke about the weather bureau getting it wrong once again…

On the train this afternoon on the way home, the sky began to darken ominously, the wind began to blow (hard!) and by the time I got home it was dark and dismal, and the heavens did indeed open up and the wind blew forcefully to give us a storm the likes of which of we don’t often see. Still it wasn’t as bad as most people expected, but nevertheless, enough to make it worthy of blogging about…

The rain of course is blessed. With our perpetual drought and dwindling water supplies in Victoria, the storm with its bucketfuls of rain was a pleasure to behold. We have been told that our water in the future will be assured as it will be supplied by a desalination plant, for which tenders have been submitted and between the two finalists one was successful. This desalted water will be at a considerable cost. The taxpayers have already paid for the unsuccessful tender, the losing company given a “consolation payment” by our State Government running into several millions of dollars. The winning tender will be given generous concessions and of course the water prices and rates will increase precipitously once the water begins to flow to the consumers. After all, we shall need to maintain the executives of a private company to the life style they have been accustomed in their previous employ. Six figure salaries, share packages, generous superannuation, tax benefits and a golden handshake that runs into several millions of dollars when they finally retire.

Utilities like electricity, water, gas, telephone services, postal services, health care, etc, should be government-owned and run. Two decades ago, when this was the case in Australia, there were jobs, cheap rates, good service and government accountability for failures, poor service and rate hikes. Now that we have privatised it all, who can tell where we shall end up? Perhaps the readers of this blog in the USA can tell us?

Here is a short video I shot through the front room window while the rain was pelting down.