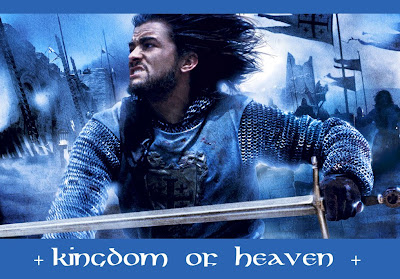 “The age of chivalry is gone. That of sophisters, economists and calculators has succeeded.” - Edmund Burke

Well after spending all weekend proof-reading, I needed a little break and last night, for a Sunday night treat I watched Ridley Scott’s 2005 epic, “Kingdom of Heaven”. This was quite a film, especially as it was the director’s cut on Bluray disc, totalling to 192 minutes. Well, it was quite magnificent and despite its length kept me enthralled and engaged. The production was a joint European/American one and several good actors gave quite good performances: Orlando Bloom, Eva Green, Liam Neelson, Marton Csokas, Brendan Gleeson, Jeremy Irons, being just a few.

This is a film about one of the Crusades the film’s story beginning in the year 1184 AD. Balian, (Orlando Bloom) is a peasant blacksmith in France who has just lost his wife as she has committed suicide (an interesting case of post-natal depression after she delivers a stillborn baby). Balian is visited by Godfrey of Ibelin (Liam Neeson) who tells Balian that he is illegitimate son. Godfrey tries to convince Balian to join him as he is on his way to Jerusalem. Balian is reluctant, but circumstances force him to find his father and join him on the trip to Jerusalem. Godfrey dies of a wound sustained in battle, but manages to knight Balian and make him his heir to his Baronetcy of Ibelin in the Holy Land.

After various adventures, Balian finds himself in Ibelin that he makes fertile by introducing European “technology” and irrigation works. Balian also aligns himself with the leprous King of Jerusalem and with Sibylla, the king’s sister who is married and has a young son. Leprosy is depicted well in this film and there are all sorts of interesting little medical vignettes, which I enjoyed (but I am prejudiced in this respect). Balian proves himself to be more than worthy of being made a knight, while many nobles behave in a despicable way. Guy de Lusignan (Csokas), a member of the Knights Templar, is especially aggressive and intolerant, and causes a break in the good relations with the Muslims that was brokered by King Baldwin by attacking them ceaselessly. The powder keg of Jerusalem erupts when the King dies and the Muslim leader Saladin besieges the city...

The cinematography, music and direction in this film are excellent. Balian is a little bit too earnest and dour throughout, but of course he has to play the perfect knight. Jeremy Irons and Liam Neelson are very good in their roles as is the dastardly de Lusignan. The film is a very balanced view of the Christian/Muslim relationship, although the Christian clergy are the ones who are most contemptuously depicted. The true noble men whether Christian or Muslim are generous, kind, lofty of spirit and fair. The story is an allegory of sorts of the Middle East situation of the present time, as well as being a historical piece.

Saladin (Ghassan Massoud) the sultan of Egypt and Syria is shown to be a chivalrous and worthy man, who not only wins his battles but is prepared to be clement with the defeated. As such, he is respected by the Christian noblemen he ousts from the Middle East. This sympathetic depiction of the Muslim leader in this film corresponds with historical fact as Richard the Lionheart afforded Saladin, who was his nemesis, every courtesy and compliment befitting a fellow knight.

I enjoyed the film quite a lot and recommend it most highly, warning once again that there are some gory scenes of battle in it, so if you are faint-hearted then be warned.
Posted by Intelliblog at 02:41