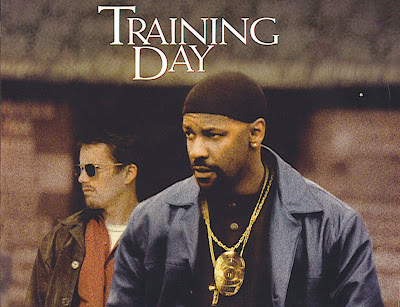 “We challenge the culture of violence when we ourselves act in the certainty that violence is no longer acceptable, that it's tired and outdated no matter how many cling to it in the stubborn belief that it still works and that it's still valid.” - Gerard Vanderhaar

At the weekend, we watched a film I didn’t particularly want to see. I had heard quite a lot of hype about it and it was advertised to death when it first came out and I think it even won a couple of awards (yes, Denzel Washington got the Oscar for best male lead in it, and won a whole lot of other awards, IMDB tells me). At the end of it, I hadn’t changed my mind about it and this isn’t a film I would recommend to a friend of mine.

The film was Antoine Fuqua’s 2001 “Training Day”. Denzel Washington, Ethan Hawke, Scott Glenn, Tom Berenger, Eva Mendes and a whole lot of other actors I don’t know played in it. The film is pure Hollywood cops-and-robbers, with action, blood gore, corruption, drugs, dirty money, sleazy people, dilapidated neighbourhoods, and good guys who aren’t really any good at all. Very predictable and pandering to a public whose tastes have become jaded with each such similar film loading more and more violence and blood and gore and swearing and car chases and bad guys and guns and…

The plot is easy enough to be comprehended by even the most mentally challenged. Jake Hoyt (Hawke) in Los Angeles has applied for a position as a Narcotics officer in the Police Department. However, in order to be accepted, he must go through approximately 24 hours of training from a veteran Narcotics officer, Alonzo Harris (Washingtom). Harris has a nasty reputation for not treating victims very well, abusing suspects, handling drugs and other evidence in a questionable matter, and opening fire randomly. Harris’s modus operandi is unorthodox to say the least and Jake soon realises that he must be as devious and as unconventional as Harris in order to survive his first day.

Maybe I wasn’t in the mood for it, maybe it was my prejudice against this particular film, maybe I just wanted something light and fluffy, but whatever it was, I disliked this movie intensely. I could not warm up to any of the characters, and even Jake as the “hero” was quite dislikeable for me. Why did we watch it? It was on special offer from the video store and when I was getting it I thought I would give it a chance as a prejudice is bad counsel in most cases. Well, in this case it wasn’t the case. IMDB users give the film 7.6/10. I give it a 5/10.

Should you watch it? Well make up your own mind. If you like Hollywood cops movies with violence, sleaze, car chases and lots of people wanting to kill each other because they happen to possess a gun and want money, go ahead and watch it. This is not an intellectual film nor does it have a special message. It didn’t even have humour in it. It was just a horrible movie about horrible people doing horrible things to each other. Have you seen it? Tell me what you thought of it…
Posted by Intelliblog at 21:35