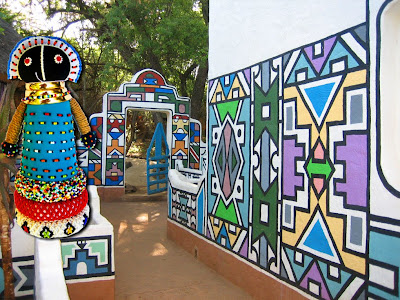 “We have learned to fly the air like birds and swim the sea like fish, but we have not learned the simple art of living together as brothers.” - Martin Luther King, Jr

For Art Sunday today, an example of Ndebele art from South Africa. When I visited South Africa several years ago, it was my second trip there. The first time was when I was a young boy. I still remember that first trip very vividly as it was a country that was so different from anything I had experienced and so different from what I had learnt in the textbooks of primary school. The second time around was as surprising because of the crumbling apartheid and the immense social changes it had created. The Ndebele village that I visited the second time was a magical experience.

Although the origins of the South African Ndebele are shrouded in mystery, they have been identified as one of the Nguni tribes. The Nguni tribes represent nearly two thirds of South Africa’s Black population and can be divided into four distinct groups; the Central Nguni (the Zulu-speaking peoples), the Southern Nguni (the Xhosa-speaking peoples), the Swazi people from Swaziland and adjacent areas, and the Ndebele people of the Northern Province and Mpumalanga. The history of the Ndebele people can be traced back to Mafana, their first identifiable chief. Mafana’s successor, Mhlanga, had a son named Musi who, in the early 1600’s, decided to move away from his cousins (later to become the mighty Zulu nation) and to settle in the hills of Gauteng near where the capital, Pretoria is situated.

Ndebele art has always been an important identifying characteristic of the Ndebele. Apart from its aesthetic appeal it has a cultural significance that serves to reinforce the distinctive Ndebele identity. The Ndebele’s essential artistic skill has always been understood to be the ability to combine borrowed exterior sources of stimulation with traditional design concepts inherited from their ancestors. This maintains an identifiable individuality, but also keeps the designs and colours fresh and ever-new.

Ndebele artists demonstrate a fascination with the linear quality of elements in their environment and this is depicted in their artwork. Painting was done freehand, without prior layouts, although the designs were planned beforehand. The characteristic symmetry, proportion and straight edges of Ndebele decorations were done by hand without the help of rulers and squares. Ndebele women were responsible for painting the colourful and intricate patterns on the walls of their houses.

This afforded the traditionally subordinate wife with an opportunity to express her individuality and sense of self-worth. Her innovativeness in the choice of colours and designs set her apart from her peer group. In some instances, the women also created sculptures to express themselves. The back and side walls of the house were often painted in earth colours and decorated with simple geometric shapes that were shaped with the fingers and outlined in black. The most innovative and complex designs were painted, in the brightest colours, on the front walls of the house. The front wall that enclosed the courtyard in front of the house formed the gateway (izimpunjwana) and was given special care (see picture).

Windows provided a focal point for mural designs and their designs were not always symmetrical. Sometimes, make-believe windows are painted on the walls to create a focal point and also as a mechanism to relieve the geometric rigidity of the wall design. Simple borders painted in a dark colour, lined with white, accentuated less important windows in the inner courtyard and in outside walls.

The Ndebele also have considerable skill with beadwork and in jewellery making. The intricate patterns of their art also find expression in these forms of art and craft. Another popular outlet for their creativity is the creation of “fertility dolls”, miniature versions of the women who create them and whose ownership assures them of many descendants (see picture).

When I first saw Ndebele art, of course I was delighted with it. It reminded somewhat of some native American Indian patterns and the colours were also reminiscent of the pre-Columbian cultures in the Americas. It drove home the point for me that no matter where we humans are on earth, our common ancestry and humanity is stronger than any difference that some try to convince us exists amongst us.
Posted by Intelliblog at 01:40