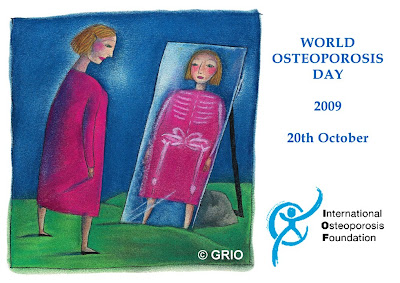 “The great secret that all old people share is that you really haven't changed in seventy or eighty years. Your body changes, but you don't change at all. And that, of course, causes great confusion.” - Doris Lessing

World Osteoporosis Day is observed on October 20th every year and provides an all-important focal point for informing and educating the general public and policy makers about the prevention of a disease, which is still ignored by many and about which there is poor general awareness. World Osteoporosis Day 2009 is the second year of a “call to action” campaign which seeks to mobilize the power of millions of concerned citizens to advocate for better osteoporosis healthcare policies in government healthcare systems, private insurance companies, and corporate healthcare networks.

Osteoporosis is a chronic disease of the skeletal system, caused by the progressive loss of bone density. Depletion of minerals, especially calcium from the bones reduces their density, making them increasingly porous, weak and brittle. This increases the risk of fracture anywhere in the body. Bones at the wrist, spine and hip are especially prone to fractures. Osteoporosis is an insidious disease that strikes silently without too many symptoms in the initial stages. Often, it takes an unexpected fracture to discover the condition. Awareness of the risk factors can decrease its incidence.

Between 12 to 20% of people die within one year following a hip fracture. It is estimated that 80% of those who are at high risk of osteoporosis, and have suffered at least one fracture, have neither been identified nor treated for the disease. Women are more at risk to present with severe osteoporosis, especially after the menopause (1 in 3 women over 50 will experience osteoporotic fractures, as will 1 in 5 men).

Many national governments do not treat osteoporosis as a major health priority and fail to provide adequate resources for its detection and treatment. Many health insurance schemes still do not cover diagnosis and treatment prior to the first fracture – even when it is cost effective to do so. World Osteoporosis Day was started in the UK in 1996 by the UK National Osteoporosis Society. It has now been taken over by the International Osteoporosis Foundation (IOF) that has as a focal point educating the general public about the disease, but also to activate so as get the policy makers and government to act and introduce policies and laws that prevent this disease in the population.

Adequate levels of calcium intake can maximise the positive effect of physical activity on bone health during the growth period of children. Calcium supplementation has been shown to have a positive effect on bone mineral density in postmenopausal women. Calcium and vitamin D supplementation reduces rates of bone loss and also fracture rates in older male and female adults, and the elderly. In institutionalised elderly women, this combined supplementation reduced hip fracture rates. Fruit and vegetable intake was positively associated with bone density in a study in men and women. The exact components of fruits and vegetables, which may confer a benefit to bone are still to be clarified. Moderate alcohol intake is not thought to be harmful to bone. However, chronic alcohol abuse is detrimental to bone health, with one of the mechanisms being a direct toxic effect on bone forming cells.

Remember that 2.2 million Australians are affected by osteoporosis. About 11% of men and 27% of women aged 60 years or more are osteoporotic, and 42% of men and 51% of women are osteopenic. The lifetime risk of osteoporotic fracture after 50 years of age: 42% in women, 27% in men. There are 20,000 hip fractures per year in Australia (increasing by 40% each decade). Total costs relating to osteoporosis are $7.4 billion per year of which $1.9 billion are direct costs.

Celebrate World Osteoporosis Day and raise public awareness of it!
Posted by Intelliblog at 01:22