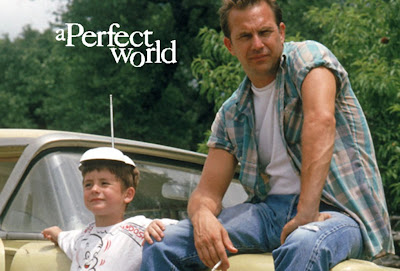 “Making the decision to have a child is momentous. It is to decide forever to have your heart go walking around outside your body.” - Elizabeth Stone

Yesterday we went for a drive as it was Sunday and we wanted to get out of the house. The weather has been rather cool and wet (which we have been appreciating, don’t get me wrong!), but it has been forcing us indoors more than the season would merit. In any case, the outing was quite a disappointment as the shops looked rather dowdy, the people rushing hither and thither like headless chickens and the atmosphere of Christmas-motivated consumerism quite depressing. Even the decorations were more tinselly than usual and the piped Christmas music a token gesture.

We came back home and sat down to see a movie. It proved to be a good one, which I had heard about but had never actually seen. It was Clint Eastwood’s 1993 “A Perfect World”. It was once again a harrowing movie, but one with a great deal of feeling and one which stays in one’s mind. Clint Eastwood has mellowed in his middle years and old age into an excellent director and in this film where he both directs and acts he does an excellent job.

The plot concerns two prison escapees who barely tolerate one another and want to stick together just enough so as to as to get away from the prison. After escaping, they kidnap a little boy from a single mother who is a Jehovah’s Witness and has three young children to raise. The film has less violence and blood than one would expect from such an outline, but because the violence is sparingly used, it jars one’s sensibilities even more. Butch, played very well by Kevin Kostner, is not a “good guy”, but he is not the worst man either, as he himself says. The boy Phillip (played by TJ Lowther), has been brought up to follow their family’s religion, which forbids him to celebrate Halloween, Christmas, participating in parties, and pretty much any fun common for children of his age. A relationship develops between Butch and Phillip, Phillip seeing in Butch the father he needs, while Butch sees in Phillip himself as a youngster and the son he has never had.

Clint Eastwood plays relatively minor role (Chief Red Garnett - a Texas Ranger who's in charge of Butch’s capture). Laura Dern plays Sally Gerber, a criminologist the Governor forces upon Red has a supporting role, highlighting the male chauvinist attitudes of 1960s Texas. Their function in the script is like a Greek chorus, supplying further information about Butch’s past and commenting on the action. They both do a good job, but the film belongs to Costner, easily one the best roles of his career.

The direction and character development are fantastic, and once again the viewer is led into having ambivalent feelings towards the anti-hero – Butch. One ht one hand, his past with the two murders he has committed repels us, his kidnapping of the boy and his encouragement of the boy to break the law is hardly an attractive part of his character, but one cannot help but feel a warming sympathy towards, especially as we learn more about his background.

The film which is over two hours long doesn’t pall at all and it maintains a good pace, with an easy unfolding of the story, each scene revealing a little more about the complex relationships that are inherent in the plot. The ending of the movie is one of the most tense and sad ones I have seen for a little while and the actors are all excellent in what must have been a particularly taxing one, emotionally. John Lee Hancock, who wrote the script has done a fine job and he is no novice, having several other films in his oeuvre, as writer, director and producer.

See this film, it’s a good one. I’d like your opinion of it if you have seen it.
Posted by Intelliblog at 21:34