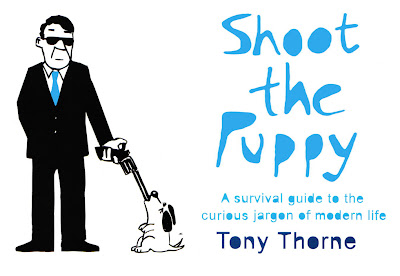 “Man is a creature who lives not upon bread alone, but primarily by catchwords.” - Robert Louis Stevenson

I am reading a book by Tony Thorne at the moment called: “Shoot the Puppy”, with the subtitle: “A Survival Guide to the Curious Jargon of Modern Life”. It was first published by Penguin in 2006 and is still available. The title and subtitle say it all, and it is an amusing book that attempts to navigate the unwary reader through the “ever-growing heap of bizarre (sometimes downright silly) contemporary jargon from around the English-speaking world and explains where it comes from, who uses it and what it really means.”

In its most positive sense, “jargon”, is a type of professional, efficient shorthand. The word “jargon” can be traced to 14th century Old French, but the actual origin is unknown. “Jargon” is perhaps derived from the 14th century term for “twittering or warbling of birds,” which in turn has the root ‘garg’ from which also stem such words as “gargle,” and “gurgle.” The original meaning was “to make a twittering noise or sound, but by modern standards, it has three uses. One current or modern definition of jargon is “an outlandish, technical language of a particular profession, group, or trade.” Another meaning is “unintelligible writing or talk.” Yet another definition is “specific dialects resulting from a mixture of several languages.” Since the recurring problem with jargon is that only a few people may understand the actual terminology used by different groups, this may explain its origin from “twittering” which, of course, would be misunderstood by most people. However, a “jargonaut”, one who studies jargon, may claim that jargon was invented simply as a professional shorthand, developed out of convenience rather than intentional trickiness.

“Slang”, a word often confused with “jargon” is defined as “an informal vocabulary composed of invented words, arbitrarily changed words, or extravagant figures of speech.” Slang is a compilation of words that have been labelled as “unruly, unrefined, and illogical.” The word “Slang” derived, according to most etymologists, obscurely. The general consensus it that it is related to the standard word “sling” as used in archaic expressions such as “to sling one’s jaw,” meaning to “speak rowdily or insultingly.” Others believe it to be a derivation from the French word for language, “langue.” Quite often, the slang of specific groups (eg. of the underworld) may have been invented or elaborated upon so as to obscure meaning, except to the initiated.

Here are examples of jargon versus slang to describe a “black eye”:
Medical jargon: Unilateral periorbital haematoma;
Slang: A “shiner”.

Now back to the book: What does “to shoot the puppy” mean? Well, I’ll let the author explain in his own words in this extract from the book:

Quote
shoot the puppy
meaning: to dare to do the unthinkable

Desperate measures are needed: “There's nothing else for it, we're going to have to shoot the puppy!” This latest bizword was nominated by correspondent David Murray, who described the context in which the phrase is used: “Only the true leader has the strength to challenge ideas which are emotionally sensitive… and do what nobody else has the heart to do.” So shooting the puppy is all about ultra-macho decision-making, several steps beyond “grasping the nettle” or “biting the bullet”. In a corporate climate where down-sizing has become capsizing (“capping” staff numbers until there’s no one left to steer the ship) and right-sizing has given way to downclosing, the idea is often invoked negatively: “I’m not going to be the one to shoot the puppy; we’d better hire in a consultant to recommend the restructuring.”

Of course the phrase has overtones of irony, satirizing the ruthlessness with which business decisions have to be made, but it started out as a satire on another institution; the American television game show. Back in the early 1980s US television producer Chuck Barns used to muse about how far the public would be prepared to go if tempted by greed or fame. He fantasized the ultimate television entertainment in which an audience would be presented with a small child holding a puppy and be offered money to shoot the animal live on air. The host would gradually reduce the amount of cash on offer to see who would do it just to appear on television. Barris, incidentally, may have been inspired by an even earlier magazine cover for National Lampoon, in which a pistol is held to a puppy's head with the caption, “Buy this magazine or die dog gets it.” Maybe Barris’s black satire doesn’t any longer seem so far-fetched, and in a virtual way it has come true. There’s now a video game from HappyPuppy.com called “Just Shoot the Thing!” which allows you to take out your frustrations by scanning in your own targets - boss, client, product, etc. - which can then be shot at.

An alternative version of our phrase, shoot the dog, was used by singer George Michael as the title of a widely banned anti-Iraq War single attacking George W Bush and Tony Blair. Michael was probably alluding also to Wag the Dog (the movie satirizing war-mongering politicians) and to one of my other favourite clichés, "Don't shoot the messenger."
Unquote...
Posted by Intelliblog at 21:41