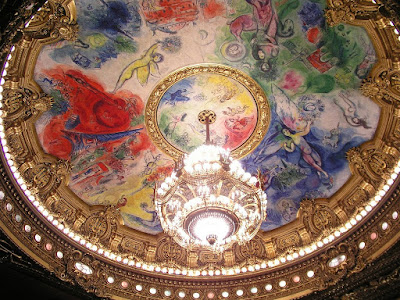 For Art Sunday today, Marc Chagall (1887-1985).  He was born in Vitebsk, Byelorussia to a poor Hassidic family. The eldest of nine children, he studied first in a heder before moving to a secular Russian school, where he began to display his artistic talent. With his mother's support, and despite his father's disapproval, Chagall pursued his interest in art, going to St. Petersburg in 1907 to study art with Leon Bakst. Influenced by contemporary Russian painting, Chagall's distinctive, child-like style, often centring on images from his childhood, began to emerge.

From 1910 to 1914, Chagall lived in Paris, and there absorbed the works of the leading cubist, surrealist, and fauvist painters. It was during this period that Chagall painted some of his most famous paintings of the Jewish shtetl or village, and developed the features that became recognizable trademarks of his art. Strong, and often bright, colours portray the world with a dreamlike, non-realistic simplicity, and the fusion of fantasy, religion, and nostalgia infuses his work with a joyous quality. Animals, workmen, lovers, and musicians populate his figures; the “fiddler on the roof” recurs frequently, often hovering within another scene. Chagall's work of this period displays the influence of contemporary French painting, but his style remains independent of any one school of art. He exhibited regularly in the Salon des Independants.

In 1914, before the outbreak of World War I, Chagall held a one-man show in Berlin, exhibiting work dominated by Jewish images and personages. During the war, he resided in Russia, and in 1917, endorsing the revolution, he was appointed Commissar for Fine Arts in Vitebsk and then director of the newly established Free Academy of Art. The Bolshevik authorities, however, frowned upon Chagall's style of art as too modern, and in 1922, Chagall left Russia, settling in France one year later. He lived there permanently except for the years 1941—1948 when, fleeing France during World War II, he resided in the United States. Chagall's horror over the Nazi rise to power is expressed in works depicting Jewish martyrs and Jewish refugees.

In addition to images of the Hassidic world, Chagall's paintings are inspired by themes from the Bible. His fascination with the Bible culminated in a series of over 100 etchings illustrating the Bible, many of which incorporate elements from Jewish folklore and from religious life in Vitebsk. Chagall's other illustrations include works by Gogol, La Fontaine, Y. L. Peretz, and his autobiographical Ma Vie (1931; My Life 1960) and Chagall by Chagall (1979).

Chagall painted with a variety of media, such as oils, water colours, and gouaches. His work also expanded to other forms of art, including ceramics, mosaics, and stained glass. Among his most famous building decorations are the ceiling of the Opera House in Paris, murals at the New York Metropolitan Opera, a glass window at the United Nations, and decorations at the Vatican. Israel, which Chagall first visited in 1931 for the opening of the Tel Aviv Art Museum, is likewise endowed with some of Chagall's work, most notably the twelve stained glass windows at Hadassah Hospital and wall decorations at the Knesset.

Chagall received many prizes and much recognition for his work. He was also one of very few artists to exhibit work at the Louvre in their lifetime.

In 1963 Chagall was commissioned to paint the new ceiling for the Paris Opera (illustrated above), a majestic 19th-century building and national monument. André Malraux, France's Minister of Culture wanted something unique and decided Chagall would be the ideal artist. However, this choice of artist led to controversy: some objected to having a Russian Jew decorate a French national monument; others took exception to the ceiling of the historic building being painted by a modern artist. Some magazines wrote condescending articles about Chagall and Malraux.
Posted by Intelliblog at 01:17