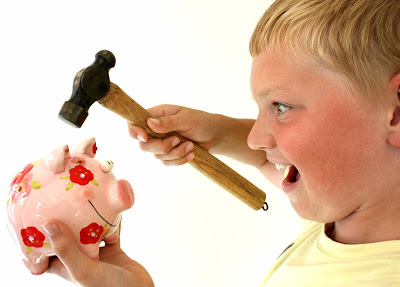 “Do not value money for any more nor any less than its worth; it is a good servant but a bad master.” - Alexandre Dumas fils

For today’s blog I am climbing on my soapbox. This will be a rant, and you are warned to stop reading now as I will be raving on about one of my pet hates: Banks and bankers! Unless you are a banker or have hundreds of thousands of dollars invested in bank stocks, I think you may have some gripes that are similar to mine… If this is the case, read on. If you are a banker or an investor, this is not the blog for you, go away!

How often have you gone to a bank and several minutes later after negotiating some transaction you feel your blood pressure rising and the arteries in your brow pulsating? How often have you gone from teller, to customer service officer, to the Section Head and finally to Branch Manager, getting more and more upset after each encounter? How often is it that you have to maintain a point of view (perfectly reasonable and logical) only to have to be forced to abandon because it “doesn’t adhere to bank policy”? And how often is it that you go in to have those cryptic “bank charges” that appear on your account statement deciphered? As far as interest goes, let’s not go there - banks have highway robbery down to a fine art (and it’s all legal).

Bankers are good at making money for themselves and sometimes for their banks (and shareholders), but they are a social liability. A new study published by The New Economics Foundation in the UK has found that bankers are a drain on society. In fact, it estimated that for every $1 a banker creates in terms of value to society, he effectively takes $7 from society -from us! The study rated jobs on how much they help or hinder society through the social, economic and environmental effects of their work. Using these criteria, the study concludes that the view of “bankers creating wealth that eventually trickles down to others” is no longer correct.

Instead, the study says, the actions of high-earning investment bankers had damaging social effects. It was mainly through the actions of these bankers that the global financial system was brought to the brink of collapse, causing jobs to be lost and increasing public debt. The report says that advertising executives and tax accountants also destroy more of society’s wealth as they go about creating their own. They are not only all overpaid, but they are overpaid at the expense of others. The “others” being you and me!

In contrast, lowly-paid workers such as hospital cleaners, waste recyclers and childcare workers are far more valuable. Childcare workers, for example, free up potential wealth for society by helping parents to keep on working generating about $9.50 for every $1 they are paid. Waste recycling workers who promote recycling, reducing carbon emissions and goods being thrown into landfill, generate about $12 for every $1 they earn. Is it a surprise that the Foundation recommended that there needed to be a “fundamental rethink of pay scales”?

Last week there was a tremendous public outcry when Westpac, one of our “successful” banks launched the infamous “banana” advertising campaign to justify its increase of bank charge and interest rates. The bank was embarrassed to the nth degree as the ill-fated advertisement received damning reviews and immense customer backlash:

The patronising tone, the ill-used analogy, the thinly-veiled sarcasm as greed was camouflaged as magnanimous social care are all truly sickening. The bank raised its rates to keep the bankers living in the style they are accustomed to. Pure and simple, no bananas enter the equation at all.

That’s it, rant over, getting down from my soapbox!
Posted by Intelliblog at 00:55