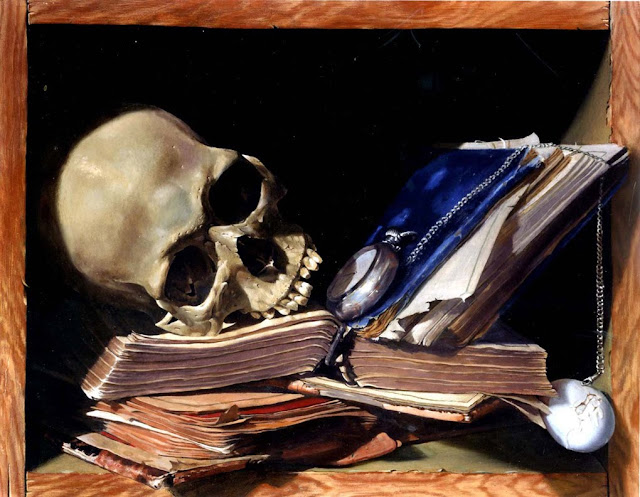 “No one can confidently say that he will still be living tomorrow.” - Euripides

For Art Sunday today, a painting by an American contemporary artist, Sean Delonas. He is a cartoonist, illustrator and talented artist, with some beautiful works in his oeuvre, as well as many humorous and quirky ones. He is best known for his cartoons that appear daily on page six of the New York Post.

The painting I have selected for today, is a typical “memento mori” work, which in the past was an extremely common and morally edifying genre of painting. “Memento mori” means in Latin “remember that you will die”. Its purpose was to remind the onlooker that whatever your present happy state, your death is inescapable. The art may convey the message “eat, drink, and be merry, for tomorrow you will die”, however, in most Christian art, in which the theme is seen often, it is more of a reminder of the vanity of earthly glory and pleasure. For this reason, these still life paintings were also known as “Vanitas” (vanity).

Typical symbols that are used in such paintings include skulls, hourglasses, snuffed candles, wilting flowers or fruit past their prime, and insects. Anything related to the passage of time can be a memento mori, and many public clocks once included memento mori phrases such as “tempus fugit” meaning “time flies”, or used an automated figure of Death to strike the bell on the hour. Personal watches were also often adorned with symbols of death, such as skulls. Other small memento mori objects were intended to be carried on one’s person as a reminder of mortality. For example, a coffin that opens on a scene of a rich man, in Hell.

Delonas’ painting is a typical vanitas, with numerous symbols of memento mori. The obvious skull, which is the face of death; the watch signifying the passage of time; the cracked egg indicating the fragility of our existence; the stack of old books, meaning that not even knowledge or wisdom will help one evade death. The painting also has elements of “trompe l’oeil” or a visual illusion as used to trick the eye into perceiving a painted detail as a three-dimensional object.
Posted by Intelliblog at 00:10