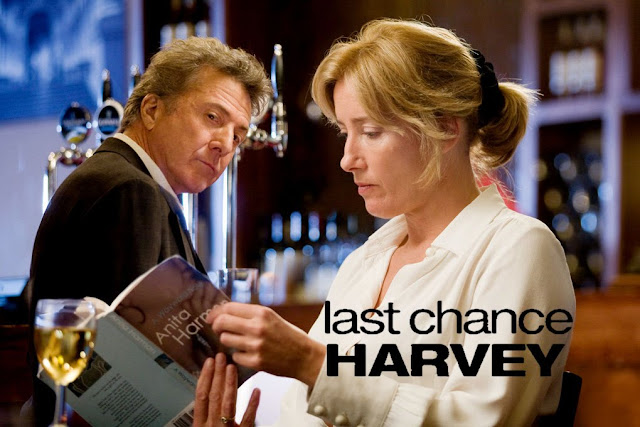 “Men are no more immune from emotions than women; we think women are more emotional because the culture lets them give free vent to certain feelings, “feminine” ones, that is, no anger please, but it’s okay to turn on the waterworks.” - Una Stannard

We sat and watched the 2008 Joel Hopkins “chick flick” “Last Chance Harvey” last weekend. As a term, I detest the characterisation “chick flick”, however, it is widely used. Speaking to some women friends, I was surprised to learn that they are OK with the use of the term and that in these liberated times, it seems to be regarded as a bit of a convenient joke. New age women are more likely to embrace their femininity and celebrate the characteristics that separate them from men. “Vive la difference”, it seems, and if a certain type of literature or art or films appeals more to women than men, then so be it, as long as it of good quality! There is nothing of course to prevent men enjoying “chick flicks” as well or women watching with pleasure films that are more appealing to men (the obvious “dick flick”). But I digress…

“Last Chance Harvey” has two big names in it: Dustin Hoffmann and Emma Thompson. There are some other familiar faces in secondary, supporting roles (e.g. James Brolin). The movie is a typical autumnal romance and as the lovers, Thomson and Hoffmann don’t have much chemistry going for them. They do a great job acting, but sadly, it works better when they don’t share the limelight. Thompson especially gives a sterling performance as the fragile, spinsterish Kate, a Londoner who has to deal with a heavily dependent mother and with several unsatisfactory liaisons in her history. Her typical British “stiff upper lip” and her brave front, her forced optimism and various coping strategies make her emotional discharges all the more powerful and pathetic to watch.

Hoffman (at 71 years!) plays Harvey, a divorced American who visits London for his daughter’s wedding and has to deal with his ex, happily remarried to Brain (Brolin) and his daughter who seemingly has rejected him as she has found a better father figure in the paternal Brian. The unlikely romance with Kate has him blossoming out in a fit of almost teenagerish abandon and as the action unfolds, we are reminded somewhat of his earlier filmic successes (I don’t know why, but I kept thinking of him playing Ben in the classic 1967 movie “The Graduate”. In any case, the roles are reversed here).

The film is conventional in plot (with even a reference to the classic tear-jerker “An Affair to Remember”) and directed in a rather pedestrian, if unoffensive way. The music does the right things at the right time, the production is slick, London looks quite gorgeous and the film ticks all the right “chick flick” boxes. I watched it with interest, but my brain was in neutral and I sketched out some work meeting agendas in my mind while watching parts of it. It was difficult for me to get emotional over it, but Emma Thompson was certainly worth seeing in it, and she had some quite amusing one-liners to recite in the film.

I got my own back the next day when we watched “Eraser” – Classic Schwarzenegger and typical “dick flick” – yeah!
Posted by Intelliblog at 21:55