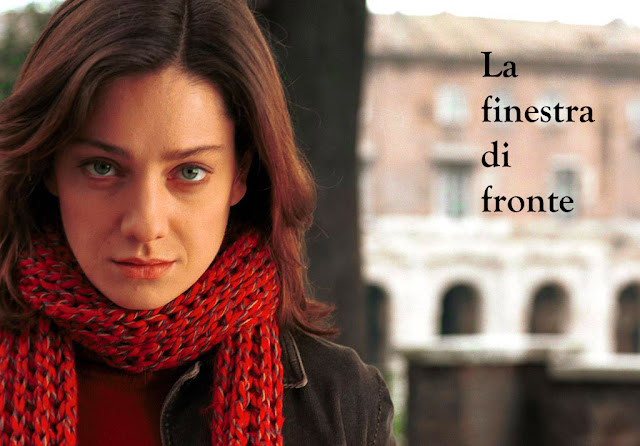 “Love unlocks doors and opens windows that weren't even there before.” - Mignon McLaughlin

Yesterday we watched a rather surprising film from Italy.  Surprising, as we had never heard anything of it and the only reason we got it to watch was the sleeve notes and the rather beautiful actress on the front cover. OK, I know, you shouldn’t judge a book by its cover or a DVD by its sleeve, but call it a whim, we suspected that it was going to be a good movie and we were glad that we did. Apparently the movie has won several awards in several festivals, including best actress, best actor, best script, best film.

The film is Ferzan Ozpetek’s 2003 “Facing Windows” or to give it its Italian title, “La Finestra di Fronte”. It starred Giovanna Mezzogiorno as Giovanna, a young woman, married to Filippo (Filippo Nigro), living in a small, contemporary, suburban Rome apartment with their two young children. Across the road, is an apartment where a young, handsome man lives on his own, Lorenzo (Raoul Bova). The two of them see each other daily and a fascination develops into love. This is a love that is improper and condemned by society, so Giovanna tries to stifle her feelings for Lorenzo and instead takes out her frustrations on her husband who tries his best for the family by working night shifts and looking after his children.

The story is overlaid on another “improper” love affair, which took place in Rome in 1943. The connection is Simone (Massimo Girroti), who is an elderly man who has lost his memory and is “rescued” from the streets by Giovanna and Filippo. As Simone almost becomes part of the family (much to Giovanna’s initial consternation and annoyance), we learn of his story and his memories are revealed piecemeal and the strange parallelism between his improper love and Giovanna’s is slowly brought to the fore. Other commonalities also emerge, including Giovanna’s passion of pastry-cooking and Simone’s seeming expertise in this art.

The film is well-crafted, with an engaging story that keeps one immersed in the world portrayed in the screen. It explores the themes of racism, prejudice, intolerance, duty, responsibility and of course the different meaning that we give to the word “love”. It is an adult (though not R-rated) movie, and I am loath to call it a chick flick, although it was described like that by the video store guy. The cinematography is great, the music fantastic and the performances very good. We enjoyed it very much and recommend it most highly. Get your hands on it and watch it!
Posted by Intelliblog at 21:13