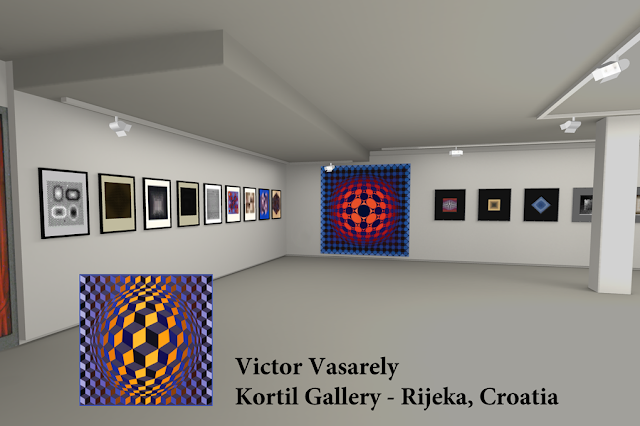 “Every form is a base for colour, every colour is the attribute of a form.” - Victor Vasarely

For Art Sunday today, the art of Victor Vasarely, or in his native Hungarian: Viktor Vásárhelyi   (born, April 9th, 1908, Pécs, Hungary – died March 15th, 1997, Paris, France). He was a painter of geometric abstractions who became one of the leading figures of the “Op Art” movement. Vasarely was trained as an artist in Budapest in the Bauhaus tradition. In 1930 he left Hungary and settled in Paris, where he initially supported himself as a commercial artist but continued to do his own work.

During the 1930s he was influenced by Constructivism, but by the 1940s his characteristic style of painting animated surfaces of geometric forms and interacting colours had emerged. His style reached maturity in the mid-1950s and 1960s, when he began using brighter, more vibrant colours to further enhance the suggestion of movement through optical illusion. Vasarely became a naturalised French citizen in 1959. Much of his work is housed in the Vasarely Museum, at the Château de Gourdes, in Vaucluse Département, southern France. In 1970 he established the Vasarely Foundation, which in 1976 took up quarters near Aix-en-Provence in a building that he designed.

For those of you with a Macintosh computer, download a free MacApp called “Kortil”. It is a virtual exhibition of Vasarely’s works in the Kortil Gallery in Rijeka, Croatia. Courtesy of the Regional Museum Janus Pannonius in Pécs, which has a collection of Vasarely’s works, the Rijeka Gallery hosted an exhibition in association with the City of Rijeka Department of Culture. Through modern technology, we too may enjoy this exhibition on our computer screen through a virtual gallery space.
Posted by Intelliblog at 02:18