MOVIE MONDAY - THREE REVIEWS IN ONE 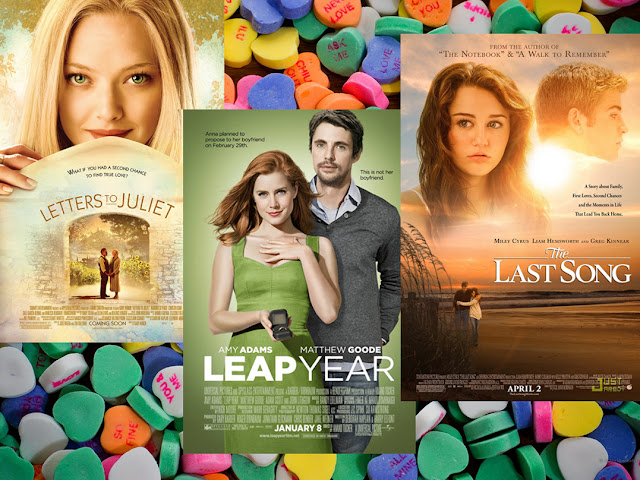 “Miracles are a retelling in small letters of the very same story which is written across the whole world in letters too large for some of us to see.” - C. S. Lewis

Over the last week we have seen three movies that could all be classed as “chick flicks” or light romantic comedies (well at least two out of three, one of them was a bit darker). All of these movies had in fact the same basic plot, but each dressed it a little differently. I read somewhere once that all novels, all movies and all short stories have a basic plot that is one of the twenty commonly used ones. Therein lies their success. Here are the 20 basic plots (I googled it!):

One can elaborate these further, of course and there are enough variations and window dressing to keep us interested, as well as combination of the above themes through subplots. However, by looking down such a list one realises just how limited the choice of plot is when we strip the story down to its bare essentials. Hence, the importance of the talent, craft and experience of a great writer or a good director in making something original and engaging out of a well-worn storyline.

The three films we saw are in brief as follows:
The 2010 Gary Winick movie “Letters to Juliet” is the classic “girl-in-an-unfulfilling-relationship-meets-a-new-man-she-initially-detests-but-comes-to-love” plot. There is a subplot of “love-lost-and-love-regained”, which allows two veteran actors (Vanessa Redgrave and Franco Nero) to shine. The film is very attractively packaged with the gorgeous Tuscan location adding great window dressing to the film. The young leads (Amanda Seyfried and Christopher Egan) do well enough and the film is a pleasant diversion. Light and fluffy and not too taxing on the neurones.

Anand Tucker’s 2010 “Leap Year” is of the same “girl-in-an-unfulfilling-relationship-meets-a-new-man-she-initially-detests-but-comes-to-love” plot, without the benefit of a subplot. The whole film hinges on the old Irish tradition of women being allowed to propose to the man they want to marry on Leap Day, February 29th. Add some gorgeous Irish scenery and pleasant enough two young leads (Amy Adams and Matthew Goode) and this is another pleasant film that will raise a few smiles, however unlikely the scenario is.

The third film, even though of the same “girl-in-an-unfulfilling-relationship-meets-a new-man-she-initially-detests-but-comes-to-love” plot has a little more depth as there are a few subplots that compete with the main storyline. It is Julie Anne Robinson’s 2010 “The Last Song”. We expected a little more from this film than what we received, having being written by Nicholas Sparks. He wrote the screenplay for this movie as a vehicle for Miley Cyrus (and it shows), and then adapted the novel from it. The novel was released shortly before the movie. Nevertheless, the film was a little laboured and the sentiments somewhat worn and mawkish.

Miley Cyrus as the teenage rebel is not terribly convincing, or perhaps I should rephrase that – terribly unconvincing, while her beau, Liam Hemsworth, is just too much to be convincing; I mean: A young, popular, sporty, handsome, rich, sensitive, understanding, intelligent, environmentally aware, public spirited, well-educated, literary (and speaks Russian), who is a good faithful friend, come on! Apparently, this film may have been the beginning of the real-life romance between the two leads, but I am not up to date with the lifestyles of the rich and famous, nor do I particularly care.

Greg Kinnear, playing the father, was a little annoying in this movie as he used about three expressions for the whole length of the film in quick succession of one another. I found his deteriorating health rather unbelievable given his good physical shape. Overall, this was stock Hollywood melodrama and a vehicle for what the studio hoped to be a rising new film star. What they ended up with was a cheap tear-jerker that lacked originality and conviction.

Out of the three films “The Last Song” was the most disappointing. Given the lightness of the previous two movies, one would not have expected much enjoyment from them. However, they were more genuine despite their unlikely plots and studious romanticised view of reality. The sugar coating held a soft centre of syrup and one could savour the cloying sweetness till the end. “The Last Song” was a saccharine coated bitter pill of cod liver oil. If one did not swallow it whole, buying into the film lock stock and barrel, one was left with a very bad taste. Presumably the film would have the same beneficial effect on our emotional health as cod liver oil has on our physical health…
Posted by Intelliblog at 13:52