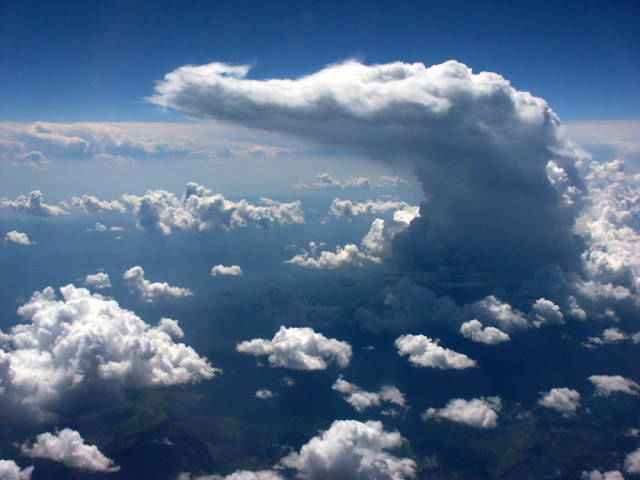 “There’s no art to find the mind’s construction in the face.” - William Shakespeare

I am in Sydney for work all day today, spending the day in meetings, and therefore, thankfully out of the dull, gray and wet weather. Fortunately the flights in eastern Australia are all back to normal after the past few days’ disruption with the ash cloud from the Chilean volcanic eruption. However, the flights from Perth are still experiencing restrictions as the ash cloud from Chile’s Puyehue volcano has reached there, but there is also concern about the ash from the Nambo volcano eruption in Eritrea over the Indian Ocean. We certainly live in interesting times…

I shall continue on the theme of the moon rabbit from yesterday’s posting by proposing “pareidolia” as the word for the day.

Pareidolia |parēˈdäl.ēə| noun
A type of illusion or misperception involving a vague or obscure stimulus (most often an image or a sound) being perceived as something clear and distinct. “I experienced a strange case of pareidolia this morning where the face of President Obama appeared on my burnt toast.”
ORIGIN: From the Greek para- – “beside, with, or alongside” (meaning, in this context, something faulty or wrong) and eidōlon – “image”.

Pareidolia is a peculiarity of our brain wiring whereby it attempts to look for the familiar in the unfamiliar. The burnt toast really doesn’t look like President Obama, we know that. Our brains tell us that it’s an impossibility, however, this doesn’t stop us from seeing something resembling human features in the configuration of light and dark areas of toasted bread. Likewise, listening the constant drone of rushing water while in the shower can give rise to an experience of an auditory pareidolia (or to be more precise, a paracusis). We may think we hear the phone ringing or snatches of conversation. The white noise of the falling water stimulates the brain to manufacture all sorts of auditory misperceptions.

Scientist Carl Sagan proposed that pareidolia confers on humans an evolutionary advantage, especially where visual stimuli are concerned. He proposed that the human brain has evolved so that it is “hard-wired” to recognise the human face and easily distinguish a myriad variations of the basic features. This allows fast discrimination of friend from foe, but will also allow us to create order out of a chaotic pattern of light and shade, manufacturing a resemblance to a face of patterns on inanimate objects. Pareidolia is perhaps the most innocent form of this tendency of humans to create order out of chaos. It is only one example of a group of related experiences, all called apophenia.

Klaus Conrad in 1958 coined the term apophenia and defined it as the “unmotivated seeing of connections” accompanied by a “specific experience of an abnormal meaningfulness”, but it has come to represent the human tendency to seek patterns in random nature in general, as with gambling, paranormal phenomena, religion, and even attempts at scientific observation. These attempts at creating meaning from random, chaotic events or data may lead to some serious effects, as gamblers can attest to after observing some perceived pattern in the random sequences of numbers that are generated at the roulette table and losing their fortune as a consequence. Similarly, serious trouble may await the scientist who may see complex patterns in the random data generated in the laboratory. Many a spurious conclusion has been drawn from such tenuous and convoluted interpretation of truly chaotic numbers.

Brain imaging has led to some interesting results when the phenomenon of pareidolia was investigated. When people see real faces, it takes a few milliseconds for the ventral fusiform cortex to register it recognises something meaningful and assign to it the label “face”. When people look at objects that resemble faces, the same part of the brain that recognises faces becomes active, although it takes a few milliseconds more for the person to identify the object as a “face”. Subsequent analysis may then disassemble the features into their component inanimate parts.

When I was a child I used to spend the summers at my grandfather’s house. As I lay in bed I used to look at the ceiling. The cracks in the plaster and slight discolourations were an infinite source of amusement to me as I could manufacture all sorts of scenes, faces, figures and landscapes. This innocent pareidolia often lulled me to sleep during siesta time, or on occasions when sleep eluded me, allowed me to construct whole stories based on the figures on the ceiling. It did not take much stimulation for my fertile imagination to be spurred into activity and allay boredom.

How many of us have not gazed up at clouds and seen fancied shapes, water stains on floors that resemble dragons, the moon and recognised rabbits, handprints or witches carrying bundles of sticks? Come to think of it, it doesn’t take much to trick our brain into pareidolic perception, does it? ;-)
Posted by Intelliblog at 21:49