A LITTLE BIT OF THE ORIENT IN MELBOURNE 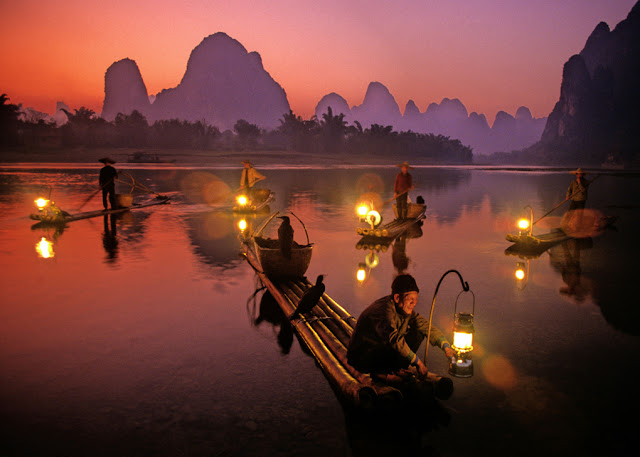 “I often think that the night is more alive and more richly colored than the day.” - Vincent Van Gogh

It was a busy morning today with lots to do around the house and many errands to run outside, as well as the regulation shopping trip and visit to the library to return some books. It was hither and thither for several hours, but finally all was accomplished and then back home for a respite. Fortunately we don’t sleep in even at the weekends and the days are long and one gets a lot done.

In the evening we went out to dinner at one of our favourite Chinese restaurants. The “Red Emperor” in Southbank. We were there with friends and decided to have one the banquet choices, which proved to be an excellent one. We had “Banquet D”, which at $75 per person turned out to be very reasonable.

We started off with a selection of steamed Dim Sum, which included meat and seafood fillings. All three pieces were delicious and cooked to perfection. A touch of soy sauce on them improved the flavour. As one of our party was allergic to seafood, the prawn dim sum was cheerfully replaced. We then continued with Spicy Quail and BBQ honey pork on the side. Although the quail was tasty, I found it a tad dry, which of course is easy enough to do with such a small bird. Nevertheless the taste more than made up for the slightly dry texture. The pork was delicious. The dinner continued with Peking Duck. This was excellent, and one of the best I have had in Melbourne. The duck was cooked to perfection and was juicy, tender and extremely tasty in its sauce. The pancakes were light and well cooked and the condiments crisp and fresh. There were two portions per person, which we all enjoyed.

The banquet progressed with a serving of Ginger Prawns with seasonal vegetables. Well cooked, flavoursome and served in a delightful sauce. Once again, an alternative spicy dish with chicken morsels was substituted quite graciously for the prawns for the allergic one in our party. The next dish was Lamb Fillets with ‘Fire-up’ Sauce accompanied by Singapore Noodles. Both lamb and noodles were very tasty and cooked exceedingly well. The dessert was a choice of any one of the following: Banana Fritters, Pineapple Fritters, Fried Ice Cream or Mango Pudding. I chose the last, which was reminiscent of a Bavarian Cream with a delicate flavour and a silky smooth texture; very light and just the thing to finish off the meal. Chinese tea or coffee followed, accompanied by delicately thin homemade almond cookies.

We had a delightful 2001 Penfolds ‘Bin 128’ Shiraz with our meal, which certainly complemented the strong and spicy flavours of our meal, even the Ginger Prawns! A very good night out was had by all with all of our party recommending the restaurant very highly.

In keeping with the meal we enjoyed, an oriental fantasy piece popular some decades ago and very familiar to the service personnel in Japan and the Far East, who were posted there in the immediate post WWII period. The lyrics are in Japanese, but the theme is China Nights. I believe the original song was from the soundtrack of a 1940 movie:

Embedding of the video has been disabled, but well worth visiting this link on YouTube to hear the famous Japanese diva Misora Hibari singing this song.
Posted by Intelliblog at 20:05