FOOD FRIDAY - WE HAVE NO SOUVLAKI... 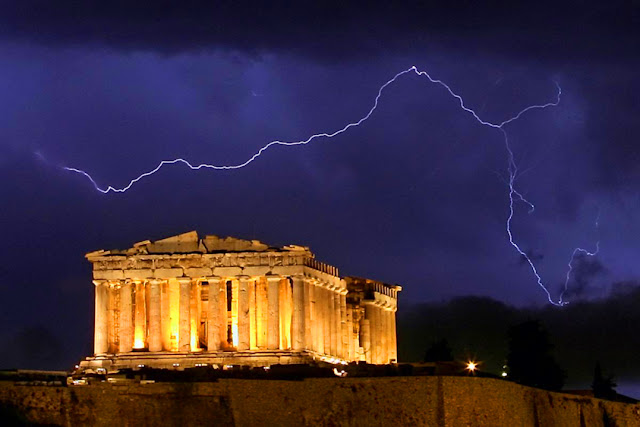 “Debt is the fatal disease of republics, the first thing and the mightiest to undermine governments and corrupt the people” - Wendell Phillips

The political and financial situation in Greece has reached crisis point. While there is no doubt that the state of affairs in Greece is serious, this is unfortunately not new, nor is it directly correlated to the current worldwide financial crisis (although it has been made more acute by the state of the world economy). Greece’s woes are rather the culmination of the tension and additive effects of incompetent political and financial management that goes back through several cycles of changing past governments.

Over the last 30 years or so, the politics of Greece have been characterised by instability, scandals, poor leadership and a reliance on external “saviours” such as the EU. The “deus ex machina” (or to give the term in its original Greek rather than the Latin translation used in English: ἀπὸ μηχανῆς θεός) has failed. Greeks have forgotten the more reliable: “God helps those who help themselves” (and seeing it was said first in Greek, here it is: Σὺν Ἀθηνᾷ καὶ χεῖρα κίνει…) and hence their downfall. Now the Greek tragedy is turning into an Aristophanic farce as the political parties brawl, rushing to close the stable door after the horse has bolted…

The abominable handling of the nation’s finances, the mismanagement of funds, the gross scandals, the duplicity and dishonesty of the politicians (or even the inexperience of the well-meaning ones) are all factors that have contributed to the present situation. Add to that massive tax fraud and evasion, a para-economy that is diddling the nation of millions upon millions of what should rightfully be public money, as well as funds from the EU that are being mismanaged and frittered away on pet projects or given to nepotistic companies owned by beneficiaries of the political party in power.

As if that weren’t enough, Greeks have been living beyond their means for too long. When Greeks joined the EU in 1981, this was greeted with jubilation as it was thought to be the country’s salvation. It was a shock in May 1998 when Greece sought to join the single currency Eurozone when the first 11 members were chosen, but it was refused because it did not qualify. Greece joined the Eurozone on January 1st, 2001. This was universally accepted as a major “win” for the country as it signified the long-desired substantive union with Europe on financial, economic and political levels. Since then, Greeks went wild, spending money with the abandon of an irresponsible youth who has been given his first credit card.

I remember when I visited Greece in 2006 I was laughed at because I did not wear “big brand” clothes (I hate being a walking advertising billboard for companies and if I do buy big brand clothes that I like, I have been known to remove the labels and insignia from them before wearing). However, more often than not I opt for clothes that are comfortable, reasonably priced and of good quality. I was horrified to see people wearing casual outfits that added up to hundreds of dollars. Spending big on entertainment, travel, consumer goods of the “highest quality” as “this was what Europeans did” was the norm…

This was all paid for by Greece joining the Eurozone, that suddenly allowed it to enjoy substantially lower interest rates, because it was able to borrow in euros. Whereas during the 1990s, Greece had frequently had to pay out 10 per cent or more (18 per cent in 1994) to borrow money, its rate fell dramatically to 3 per cent or 2 per cent, post-2001. Greece went on a spending spree, allowing public sector workers’ wages to nearly double over the last decade, while it continued to fund one of the most generous pension systems in the world (workers when they come to retire usually receive a pension equating to 92 per cent of their pre-retirement salary!). Greece has one of the fastest ageing populations in Europe and the bill to fund these pensions kept on mounting.

Tax evasion, so “in” among Greece’s wealthy middle classes, meant that the Government’s tax revenues were not coming in fast enough to fund its outgoings. Add to that hosting the Olympics in 2004, which cost double the original estimate of €4.5 billion. This only made matters worse. Greece’s national debt has consequently grown at a prodigious rate (this web page is frightening), with each citizen owing about €30,000 – compare this to Australia, where national debt amounts to only $6,900 AUD per citizen (the USA’s national debt amounts to about $50,000 USD per citizen).

While all of this was happening, middle class Greeks were enjoying European holidays, shopping trips to Harrods, Parisian fashions, luxury goods, fast sports cars, big brand everything, a life rich in leisure and according to “European standards”. Greece was the child let loose in the European lolly-shop, on credit! As is the case in these situations, the result is that the child becomes quite ill and is sick. Oh, and did I mention someone has to pay the ferryman now? and yes, I know I am mixing my metaphors!
Posted by Intelliblog at 22:00