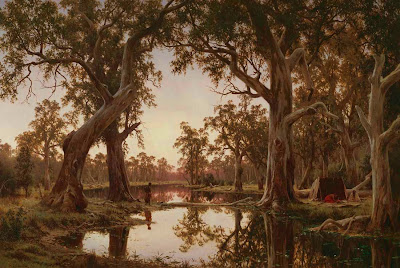 For Art Sunday today, a painting from the Art Gallery of South Australia, which I saw last time visited Adelaide. It is H.J. Johnstone’s “Evening Shadows – Backwater of the Murray”, painted in 1880. This was the first acquisition of the Art Gallery of South Australia. “Evening Shadows” is also Australia's most copied work of art. Not only did Johnstone paint at least four versions himself; it was also painted by students in Adelaide around the 1890s and early 1900s as an art school exercise. More than 90 copies of the painting (made by both skilled artists and enthusiastic amateurs) are known to exist.

This is a large oil painting (120.6 cm x 184.1 cm) depicting a twilight scene on the backwaters of the Murray River (Australia’s longest river), in the late 19th century. The fading light has almost turned the giant red river gums that dominate the scene into silhouettes, exaggerating the bulk of their trunks and the twisted angles of their limbs. Two aborigines are sitting alongside a bark hut and a campfire, while a mysterious third person is about to cross a fallen tree that spans the river to join them. This is an apparently timeless, pre-British colonial scene; however, a small clue, the blanket around the shoulders of the old man, reveals that contact between indigenous people and British colonists has occurred. The nagging thought that this small group of people might be all that remains of an entire community alters the meaning and mood of this striking image. This could be an illustration from an antipodean horror story.

It is an excellent example of an approach to landscape painting popular in Australia in the later 19th century, known as “picturesque landscape” this style of painting involved capturing the moods of nature through dramatic interpretations of remarkable natural motifs such as waterfalls, mountains and rivers. It also demonstrates the way in which European models of picturesque landscape painting were adapted by Australian colonial artists to offer city audiences dramatic interpretations of the Australian bush - by the late 19th century, Australia had become one of the most urbanised countries in the world, with most of its population concentrated in the coastal capital cities; even so, many city dwellers still identified with the bush, including Johnstone, who romanticised it for this audience

It is a significant work by Johnstone, a painter and photographer who established a reputation as a painter of picturesque views - depictions of the tranquil waters of the Murray, Goulburn and Murrumbidgee rivers form the greater part of his output; majestic red river gums often featured in his landscapes, which were frequently populated with Indigenous people, or British explorers and pioneers.

It is an outstanding example of the way in which some artists working in the late 19th century combined photographic realism with symbolism. Twilight, no matter how realistically depicted, often represented the end of something. In this particular painting it is the Australian aborigines, who were assumed at the time to be on the brink of extinction. “Evening shadows” further alludes to this notion through the powerful sense of stillness created by the mirror-smooth water and the gathering gloom
Enjoy your week!
Posted by Intelliblog at 00:16