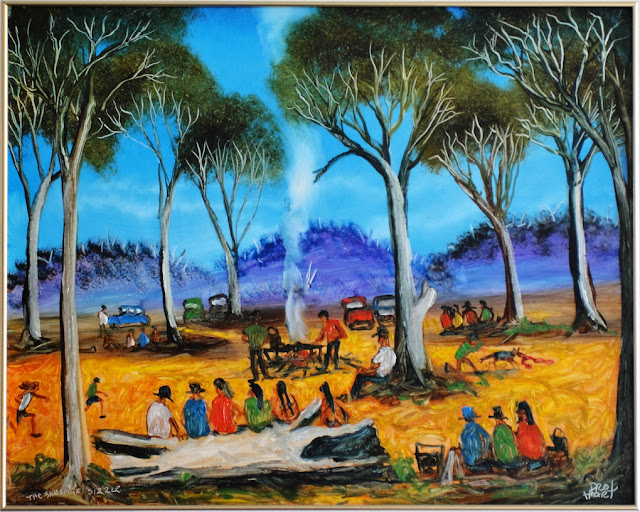 “Where we love is home, home that our feet may leave, but not our hearts.” - Oliver Wendell Holmes, Sr

Today was a hot summer’s day in Melbourne and we had a relatively lazy day. In the morning we visited an elderly friend who is struggling to take care of herself and took her some things including some shopping and frozen meals. She was pleased for the visit more than anything else and we were also happy to have caught up with her. We had a very pleasant lunch and then in the afternoon, read a little and cleaned up our studies. The evening meal was very pleasant and then watched a documentary on TV about life on a remote island – very interesting.

For Art Sunday today, a painting by a famous, popular and dearly loved – but also controversial – Australian artist, Pro Hart. Pro Hart (Kevin Charles) M.B.E. 1976, was born in Broken Hill, NSW, in 1928 and showed early promise in art choosing to illustrate his school essays in preference to writing them. Purely self-taught with no formal art training, Pro Hart, painted in a unique manner and his paintings contributed to the “Australian style” which began to emerge over the decades 60s and 70s.

He was first discovered in 1962 by an Adelaide gallery director and as a result of his first exhibition the Pro Hart legend was born. Pro had a highly individualistic semi-primitive style, depicting scenes typical of the Australian outback. As well as landscapes he has made studies of insects, miners at work, flowers, and cities. His work is widely known and collected both nationally and internationally. He is represented, amongst others, in collections such as Lyndon Johnson (ex-president USA), HRH Prince Phillip (London), Qantas Airways (Hong Kong).

Pro Hart has been the recipient of many awards including Member of the British Empire 1976, and Honorary Life Membership to the Societé Internationale Artistique (England) 1982. Pro Hart sadly died on 28th March 2006 but his art lives on.

The painting above is typical of Por Hart’s Australian everyday life and is entitled “The Sausage Sizzle”. It is a painting that hangs on the wall of one of our friends and I admire it every time we visit. It is a lively, colourful work that has a uniquely Australian flavour and it subject mater and colours are enough to make every Australian home-scik if he were overseas for a little while and they saw this painting…
Posted by Intelliblog at 00:59