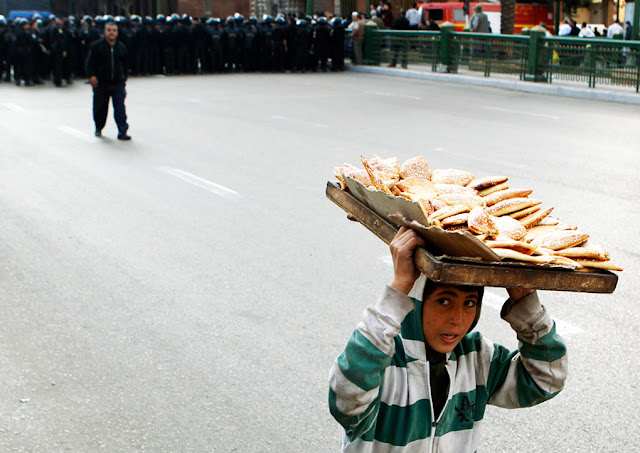 “In Egypt today most people are concerned with getting bread to eat. Only some of the educated understand how democracy works.” - Naguib Mahfouz

Well it was a beautiful summer’s day today in Melbourne, hot but not scorching, a breeze blowing now and then. We had a morning full of chores, but then visited the library and took it easy for while there. In the afternoon, when things started to get a little warmer we sat inside, where it was cool and watched a movie. Went out to dinner tonight ad the night finished relatively early.

The riots in Tunisia and Egypt are occupying a great deal of prime news time. The situation in Egypt especially seems to have reached a critical point. I read with amazement that the country had turned off its internet yesterday, something that I thought was impossible to do, but apparently yes, it did happen through the government putting pressure on the handful of internet provider companies that supply the whole country with its internet access. This is a half-baked attempt to quash dissent and anti-government feeling being expressed through social media and internet-enabled communication services… The truth will out one way or another and there surely must be more than one satellite phones capable of internet access connections.

Things are not good worldwide, and these latest riots are part of the disgruntlement and agitation that is evident around many countries throughout the world. Fortunately here in Australia, things are good and I am grateful for this.

As a special tribute to the Egyptian people tonight, I offer you a wonderful piece of music. It is a collaborative effort between Egyptian and Turkish musicians and called “Kolaymi?”, meaning, “Is it easy?” in Turkish. It is by Omar Faruk Tekbilek, taken from the Album “Omar Faruk Tekbilek & Brian Keane - Beyond The Sky” (1992).