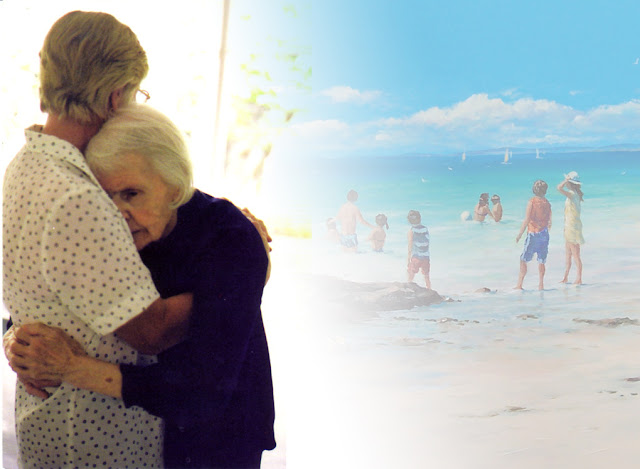 “The problem with getting older is you still remember how things used to be.” - Paul Newman

A family friend of ours was admitted into a nursing home this week. She is in her eighties and although she lived alone up till now, her increasing signs of dementia and inability to look after herself forced her family to decide that she would be better off living in a 24-hour care environment. She had done her utmost until now to conceal her memory loss and confusion. Her stratagems were ingenious to say the least, but her increasingly bizarre behaviour and her inability to cope with everyday tasks, the simplest chores and routine forced her to finally break down and admit that things were not at all normal.

It is a sad situation and it was painful to watch this woman that we knew well and liked, going through such a terrible ordeal and realise that her mind has been gradually deteriorating. We had to concede that over time, her normally alert bright eyes became increasingly dull and vacant and that her smile was a rarer and rarer occurrence. Her amusing and wry comments, engaging conversation and keen sense of humour gradually disappeared; firstly into confusion, then into outlandish incongruousness, then incoherence and now what lies ahead is complete apathy.

The loss of one’s mind is a loss of identity. Dementia robs the person of their selfhood, their perception of who they are and what makes themselves as individuals. The loss of higher mentation dehumanises and makes of the person a thing. How can one cope with this loss of self as one perceives it disappearing? How can the people who love that person cope with that living death?

The fog creeps and covers the landscape
In a pall of gray – like a winding sheet
Around a corpse recently dead.
My mind dulls, and ashen woolly thoughts
Flit in and out of my consciousness; now like butterflies,
Now like strange visitors, intruders in one’s house.

The wintry mist obscures and blunts perception,
The cold numbs me and the wetness seeps in,
Drenching my clothes, chilling me to the marrow.
Sunlit memories of childhood are vivid, with scents, aromas,
The woody, resinous smell of newly sharpened pencils
On the first day of school… Last week, wasn’t it?

The twilight yields its realm quickly to night
And as darkness falls, I am disoriented, yet strangely alert,
Feeling like a nocturnal creature: I must go out, go there!
The days all merge into one and no matter how hard I try
I cannot remember what I had for lunch, if did have anything,
Where I was five minutes ago, or who the person I talked to was.

In darkness I wander, searching for some unknown goal,
My random peregrinations having some higher purpose
That I cannot divine; yet its all-important gravity, overwhelming.
I see my wedding day clearly, attended by my adult children,
I hear old familiar songs, sounding new and fresh;
And who is this strange child calling me “Grandma”?

Summer falls heavily this year and freezes everything it touches.
Snow falls and merges with the white hair of the old woman
Staring at me reflected in some shop window, waving to me as I wave to her.
Who is this person who apes my every move? Where am I?
I wore a pink chiffon dress yesterday at my birthday party, I turned seven…
I was so happy…Why is this old woman staring at me crying?
Posted by Intelliblog at 02:13