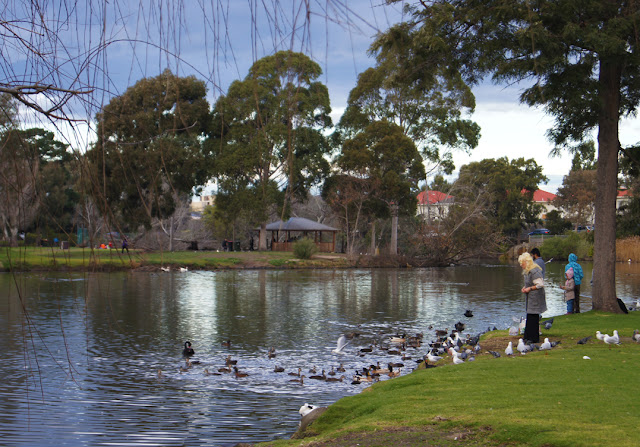 “Mozart has the classic purity of light and the blue ocean; Beethoven the romantic grandeur which belongs to the storms of air and sea, and while the soul of Mozart seems to dwell on the ethereal peaks of Olympus, that of Beethoven climbs shuddering the storm-beaten sides of a Sinai. Blessed be they both! Each represents a moment of the ideal life, each does us good. Our love is due to both.” - Henri Frederic Amiel

After a frosty morning, the day bloomed into a perfect sunny winter’s day, warming up to about 14˚C. We had a leisurely breakfast and then ventured out to go and see our friend in the nursing home. One the way back we stopped at Coburg Lake. Coburg is a northern suburb of Melbourne and in the past one of its most notorious landmarks was Pentridge Prison. Coburg Lake is on the corner of Murray and Newlands Rds and this lake was originally created by prisoners from Pentridge Prison, which is only across the road. Its water comes from Merri Creek, which flows into the lake and then continues downstream past a weir, to join the Yarra River further south.

In the mid-19th century, Victoria’s gold rush brought about a greatly increased crime rate. The government decided to establish a number of penal stockades and also make use of abandoned ships. One of these stockades was set up at Pentridge (the old name for Coburg) to receive, in December 1850, sixteen prisoners from the overcrowded Melbourne Gaol. Pentridge was thought to be a good place for a prison, being near Melbourne, yet isolated from it. Moreover the village reserve was the only Crown Land left unsold. The purpose of the stockade was to provide labour for the construction of the newly proclaimed Sydney Road. There was a lot of bluestone in the area so the prisoners could do “hard labour” breaking up the stone and working on the unmade road.

Residents were frightened and angry because the stockade consisted only of log huts on wheels behind a low 1.2 metre wooden fence with prisoners guarded by an inadequate number of overseers. Because it was so insecure, mounted aboriginal troopers were employed to patrol its perimeter. The first superintendent of the stockade was Mr Samuel Barrow.

Prisoners worked, slept and were fed in chains. People passing sometimes talked to chain gangs working on the road and gave them tobacco. Prisoners slept on wooden benches and ate standing outside in all weather. Those who broke rules or refused to work were punished by wearing heavier irons or given solitary confinement on bread and water. Some were flogged. Prisoners could only have one letter or visit every three months. The worst punishment was to be sent to the hulks, the floating prison boats moored at Williamstown.

In the period 1857-64 the stockade was transformed into a typical Pentonville-type prison. Single cells replaced the dormitory accommodation of the earlier stockade, and high external bluestone walls with towers for sentries were built providing a much higher level of security. Prisoners worked in various industries such as the woollen mill, bakery, printery, tailor’s shop, garden, library or in the labour yard rock-breaking. A car number-plate manufactory was established in 1962. By 1945, prisoners were allowed one visit per month and to receive and send one letter a fortnight. In the 1950s and 1960s the prison became a bit more humane. Prisoners could study, join a debating team and some acted and put on plays. By 1970 there were over 1000 prisoners.

With the closure of the Melbourne Gaol in 1926 all executions in Victoria had been carried out in Pentridge. The last man hanged there was Ronald Ryan in 1967. He had been found guilty of killing a prison officer, George Hodson, during a prison escape attempt. Coburg Council tried fro a long time to have the prison moved or closed. From 1984, drugs and general unrest in the prisons gave rise to rioting and strikes. In 1994, the State Government announced its program to privatise prisons. In May 1997 the northern half of the prison was officially closed and the prisoners sent elsewhere. June 1997 saw the beginning of public tours of the prison. The southern part of the prison closed on 28 November that year and in 1999 the site was sold. It has since been developed as housing estates, parklands and a business precinct.

The afternoon walk along the creek and the lake was a very idyllic one and everywhere there people doing the same, or having barbeques along the shores of the lake. Children played in the playground, families fed the ducks, young lovers canoodled and everyone was enjoying the sunshine, while just a few tens of metres away the old prison walls were a stern memorial to old, sadder times – a souvenir unheeded by the majority of people having weekend fun along the shore of the Lake.

A piece of music came into my head while we were there, and it seemed to summarise the history of the place well… It is the second movement of Beethoven’s seventh symphony. Ludwig van Beethoven’s Symphony No. 7 in A major, Op. 92, was begun in 1811. He worked on it while staying in the Bohemian spa town of Teplice in the hope of improving his health. It was completed in 1812, and was dedicated to Count Moritz von Fries. At its debut, Beethoven was noted as remarking that it was one of his finest works. The second movement Allegretto was the most popular movement and had to be encored immediately it was finished a the first performance. The instant popularity of the Allegretto resulted in its frequent performance separate from the complete symphony.