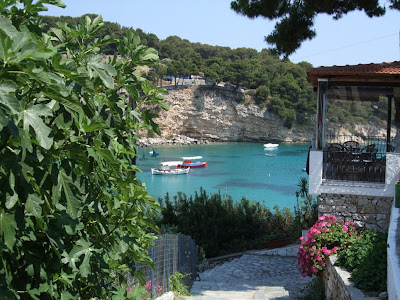 It is wonderful when your work takes you to a beautiful destination, even if you don’t have much time to enjoy it. It nevertheless is a great experience and one gets to see the beauty eve if it is in passing. My work took me to the islands of Northern Sporades in Greece, to Alonnisos, the third in line after Skiathos and Skopelos and the quietest inhabited island in this group of islands. It has a permanent population of around 2,500 people and is a very green and tranquil island. It offers many small, quiet beaches, wonderful walking opportunities and a rugged, natural landscape with many spectacular views. Visitors enjoy the easy-going atmosphere which blends in perfectly with the busy little harbour and the capital of Patitiri.

Patitiri, where most of the islanders live, is a bustling little harbour surrounded by steep rock formations with many tavernas, shops, cafes and even a small pebbly beach. The heart of the island is here, where the visitor can arrange all excursions, boat trips, car and bike rental or take the water taxis which leave every morning for the various beaches.

Alonnisos has many beaches which boast crystal clear waters with pine trees that almost reach right down to the sea edge. Most of the beaches have small, simple tavernas and all are pebbly with the exception of one, which is sandy! Half-way up the island, on the south east coast again, there is the little fishing village and pretty harbour of Steni Vala. Here, there are several excellent tavernas and the harbour usually is the temporary home of yachts and fishing boats that are in the area.

The Old Village is 4 km from Patitiri, perched on a hillside with spectacular views over Skopelos island and the Aegean. This was the main town and capital until 1965 when an earthquake destroyed the houses and was abandoned. Now, the houses have been restored and the little village with the narrow, cobbled streets has come to life again. Here, you can rent one of the many restored houses that have been redone in the old traditional style.

A village close to Patitiri is Votsi, and it sits around a magical bay with crystal clear waters and pine-covered hills around it. The next bay along is Roussoum Beach with a number of tavernas, bars and a pebbly bathing beach with gentle, aqua waters.

Alonnisos is also the centre for the Marine Park of the Aegean which was the first Marine Park to be established in Greece in 1992. There are 6 main islands in the park area - Alonnisos, Peristera, Skantzoura, Gioura, Kira Panagia and Piperi along with 22 rocky islets. The Marine Park is home to the Mediterranean Monk Seal (the rarest mammal in Europe and an endangered species). The area surrounding Alonnisos is its natural habitat and the Monk Seal calls this special and unique area its home. The Marine Park is also home to around 300 species of fish and around 80 species of birds. Alonnisos and the surrounding islands also are proud to be the home of other rare species such as the Eleonora Falcon, Audouin Gull and a rare type of goat found on the island of Gioura. This also makes Alonnisos a favoured eco-tourism destination.
Posted by Intelliblog at 03:26