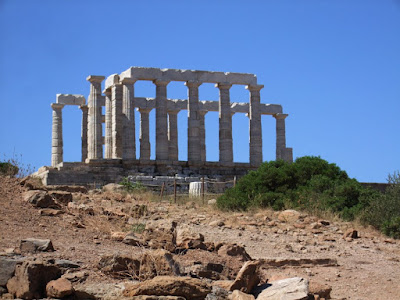 We had planned an excursion to Sounion today and started out quite early, walking to the KTEL bus station near the Field of Mars (Pedion tou Areos). Sounion is the southernmost part of Attica, a promontory about 70 km from Athens. One cannot mention Sounion without talking about Theseus, the Greek mythical hero.

Theseus was son of Aegeus, king of Athens, and Aethra, daughter of Pittheus, king of Troezen in Argolis. Some legends maintain that the sea god, Poseidon fathered Theseus. It is related that Aegeus, being childless, was allowed by Pittheus to have Theseus by Aethra. Aegeus then went back to Athens, allowing Aethra and Pittheus to raise his son. When Theseus reached manhood, Aethra sent him to Athens. On the journey he encountered many adventures. At the Isthmus of Corinth he killed Sinis, called the Pine Bender because he killed his victims by tearing them apart between two pine trees. Next Theseus dispatched the Crommyonian boar. Then he flung from a cliff the wicked Sciron, who had kicked his guests into the sea while they were washing his feet. Later he slew Procrustes, who fitted all comers to his iron bed by hacking or racking them to the right length.

On his arrival in Athens, Theseus found his father married to the sorceress Medea, who recognised Theseus before his father did and tried to persuade Aegeus to poison him. Aegeus, however, finally recognised Theseus and declared him heir to the throne. After crushing a conspiracy by the Pallantids, sons of Pallas (Aegeus' brother), Theseus successfully attacked the fire-breathing bull of Marathon. Next came the adventure of the Cretan Minotaur, half man and half bull, shut up in the legendary Cretan Labyrinth.

Theseus had promised Aegeus that if he returned successful from Crete, he would hoist a white sail in place of the black sail with which the fatal ship bearing the sacrificial victims to the Minotaur always put to sea. But he forgot his promise; and when Aegeus saw the black sail, he flung himself from Sounion and died in the sea that now bears his name, the Aegean.

Theseus then united the various Attic communities into a single state and extended the territory of Attica to the Isthmus of Corinth. With the Greek hero Heracles he captured the Amazon princess Hippolyte. As a result the Amazons attacked Athens, and Hippolyte fell fighting on the side of Theseus. By her he had a son, Hippolytus, beloved of Theseus' wife, Phaedra. Theseus is also said to have taken part in the Argonautic expedition and the Calydonian boar hunt.

Sounion is now famous for its marvellous ruins of the temple of Poseidon, god of the sea. It is situated in a gorgeous position on a clifftop and has commanding views of the sea and surrounding countryside. In ancient times, sailors would see the brilliant white marble columns of the Temple of Poseidon and know they were close to home.

The temple of Poseidon whose ruins we see today was built in 444 BC and stands on the site of an older temple. An Ionic frieze, made from 13 slabs of Parian marble, is located on the east side of the temple's main approach path. The frieze is very eroded, but depicts the mythological battle of the Lapiths and Centaurs, the Gigantomachia, and the adventures of the hero Theseus who was said in some legends to be the son of Poseidon. The east pediment (of which only a seated female figure is preserved) probably depicted the fight between Poseidon and Athena for the domination of Attica.

Local marble, taken from quarries at nearby Agriléza, was used for the temple's 34 Doric columns. The still standing 15 columns have been restored. When the temple was built there were special features incorporated which helped it combat its unique location on the water's edge. The columns were cut with only 16 flutings instead of the usual 20, thus reducing the surface area exposed to the elements and subsequently reducing the corrosion caused by the constant sea spray blown p the cliffs by the powerful winds.

Until a few years ago one could walk amongst the ruins, but today the temple has been cordoned off. About time too, as the marble ruins have been vandalized with etched graffiti. You can even see Lord Byron's name carved into the stone (it's on one of the square pillars - the southeast one - right below a joint and not too far up). Unfortunately, Byron was not the only one to either carve his name or take a piece of the temple with them. The columns are covered with names; Roman, Turk, British or by whoever else that passed this way. At one point sailors were painting their names with black tar on the architrave blocks above the columns!

In the sanctuary, a small propylaeum can be seen to the right of the modern path through the temenos. There was also a small stoa with extant column bases in the NE corner. The whole sanctuary was protected by high walls. These were built and the area fortified by the Athenians during the Peloponnesian War in the 5th century BC. The area was of the utmost importance since grain ships heading to Athens from the Aegean passed just below the site.

There is another temple in the area, which was dedicated to Athena Sounias. It is found on a low hill that tops the isthmus to the north of the Temple of Poseidon. The building had an Ionic colonnade along its east and south sides and was built at about 450 BC. There are also remains of a small Doric temple beside it, which was probably dedicated to the hero Phrontis. This sanctuary also had a protective temenos wall.

There is a coffee shop, restaurant and souvenir shop adjacent to the temple, but it is inordinately expensive. A kiosk a little further down the hill has more modest prices. The bus stop and parking area at the entrance of the archaeological area are very poorly kept and the bus stop doesn’t have a bench or a shaded area to wait in. We took the bus and went to Lavrion, a little to the northeast of Sounion, also on the coast.
Posted by Intelliblog at 03:48