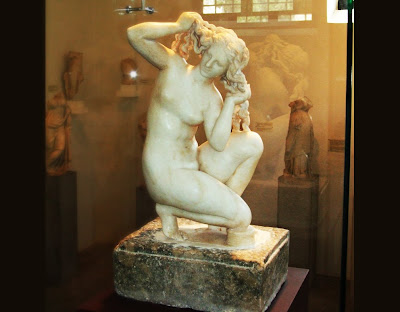 We continued our way, under an arch, and came out in front of the church of Our Lady of the Castle, which was the Knights' Cathedral. It stands at the beginning of the Street of the Knights. In 1523, the Turks converted the church into a mosque (the Enterum Mosque) and the bell-tower, which no longer stands, became a minaret. The interior, however, was left as it was. It is possible that the original structure of the church was Byzantine; estimates of its age range from the 11th to the 13th century. The church resembles a Gothic cathedral and is very well preserved.

Right after the church of Our Lady of the Castle is Museum Square, with the Inn of the Tongue of England and the Knights’ Hospital. The Inn of the Tongue of England is on the left, on the corner of the Square and an alley running down to the port. The building was reconstructed in 1919 in its original position and in the same style as the old structure, which dated from 1443 AD and was destroyed in the mid 19th century. The Knights' Hospital stands on the right of the entrance to the square. It is in perfect condition, and is obviously suitable for the initial purpose of the Order, which was to give hospitality and care to pilgrims in need of assistance in the Holy Land, and later to the Crusaders. This large and imposing edifice, which houses the Archaeological Museum, is probably the most important monument left by the Knights in the City. Building began in 1440 AD under Grand Master de Lactic and was finished in 1484 AD by Grand Master d' Aubusson. Much of the stone and other building materials was taken from the Roman building on the site of which the Hospital stands.

The museum building is quite significant and worth a closer look. On the ground floor, arched entries to the right and left of the main entrance lead to storehouses, which are now used as shops. A similar entry approximately in the center of the building is the main way into the building and there are carved decorations all around it. Directly above the entrance is a three-sided obtrusion, part of the chapel in the Great Hall on the upper floor. This is the only break in the otherwise unrelieved severity of the frontage of the building. The entrance leads us through an arch into an inner courtyard, surrounded on all sides by a two-store arcade with low arches. This is the main area that houses the Archaeological Museum.

The Archaeological Museum houses some important ancient statuary, the most important of which is a small and elegant crouching statue of Aphrodite drying her hair. This is an Imperial Roman (about 1st century AD) remodelling of the Hellenistic Aphrodite of Doidalsos dating from about the 3rd century BC. There are some archaic Kouroi, some more Greek statues, much pottery (some very well preserved), some silver and brass and some funerary stelae and finds from graves. Very impressive are the huge earthenware amphorae that were used as sarcophagi in the early historical times.

The upper floor is reached by a wide staircase in the south-east corner of the courtyard. The eastern side of this upper floor (facing the square) is occupied by the infirmary ward of the hospital, which was capable of housing about 100 patients. Half-way along the ward is the Gothic chapel, part of which protrudes, as we have seen, over the entrance. The remaining sides of the upper floor were presumably used by the nursing staff.
Posted by Intelliblog at 01:52