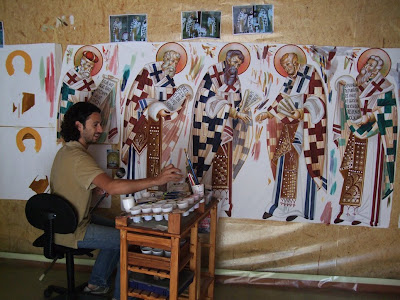 Our street continues, coming out in Agiou Fanouriou Street. We turn right (to the South). The small Byzantine church of St. Fanourios (patron saint of those searching for lost things) is again in free cruciform style. The Turks used it first as a stable and later as a mosque (Peial El Din Cami). Some fine wall-paintings have been preserved under the Turkish plaster on the walls. Immediately behind this, in Dorieos Square, is the abandoned mosque of Redjep-Pasha. This was built in 1588 AD, using materials from Byzantine and Knightly times, and was, in its day, the finest mosque on the island. Its fountain stands in front of it, and behind, in an archway with a vaulted roof, is the sarcophagus of Redjep Pasha himself.

Going back to Agiou Fanouriou Street, one of the most picturesque in the city, and turning right, back to Sokratous Street, one finds the busy bazaar area where souvenirs of all descriptions are for sale. On the left as one enters is the wooden Aga Cami (Mosque of the Governor). On the way down towards the harbour we pass through Ippokratous Square, in the centre of which stands a fine fountain. Also in the square is all that remains of an important building of the Knights known as Castellania, of which only the south-west section stands, with a large outside staircase. The building dates from 1597 and was a commercial centre. The ground floor was used for transactions between traders, and the upper floor for the court where their disputes were tried. Only a few yards farther on is the Marine Gate or Harbour Gate, flanked by two bastions. It is perhaps the most spectacular of all the gates to the castle. As can be seen from engravings of past centuries, the sea used to run up to a point directly beneath the gate.

To the south of Ippokratous Square, Pythagoras Street leads off to the side of the Ibrahim Pasha Cami. Built in 1531, this is the oldest Turkish religious building to have survived. It was repaired by the Italians, who also added a new minaret. Aristotelous Street, which leads out of Ippokratous Square, will take one to the old Jewish quarter and to the Square of the Hebrew Martyrs (Plateia Evreon Martyron), with its attractive little fountain, decorated with rows of shells, starfish, octopuses and so on, set on blue tiles and surrounded by three large sea-horses. The name of the square is in memory of the approximately 2,000 Jews, who were assembled here before being shipped to Nazi concentration camps, from which only a very few of them ever returned. The building whose front is on the north side of the square is the Palace of the Admirals, which was the residence of the Orthodox Archbishop of Rhodes before the Turkish occupation. Further along Pindarou Street (as the continuation of Aristotelous street is called) are the remains of the Gothic church of Our Lady of the City (Saint Marie du Burg), the largest Catholic church in Rhodes (30 meters by 18). One part of the church lies on the left side of the road, and the other on the right.

To the south of the Square of the Hebrew Martyrs, very close to the walls, is an interesting Byzantine church, the 15th century church of the Holy Trinity, better known by its Turkish name of Dolapli Cami. From this point on, there is a choice; one can continue to wander through the narrow lanes and alleys of the Old Town, with their houses reminiscent of a bygone age and their half-forgotten churches and mosques, or one can return to the crowded commercial streets to increase his collection of souvenirs. We chose the former and wandered through the narrow streets.

In addition to the tourist shops and private houses one may find in the Old Town, there are also some little hidden gems. For example, traditional workshops, old-fashioned butchers’ shops and general stores and some art and craft shops where people still work the slow, good old-fashioned way. We chanced upon the workshop of George Triandafyllou, a hagiographer, a painter of icons and church wall paintings. We were immediately struck by the beauty of his work and stopped to admire the icons. We started chatting and found him very friendly and modest about his work. He was engaged in the decoration of a new church and he showed us the way he was working. Apparently, nowadays, most wall paintings in churches are done on specially prepared canvas, which then is lacquered and stuck onto the prepared wall with a special adhesive. This way, the painting is preserved better over time, but also the artist can work in his studio at his leisure.

We continued our stroll through the old city, climbed over the old walls, went in and out of several more traditional shops and workshops and then finally made our way to the hotel to freshen up before an early dinner and an early night in.
Posted by Intelliblog at 03:51