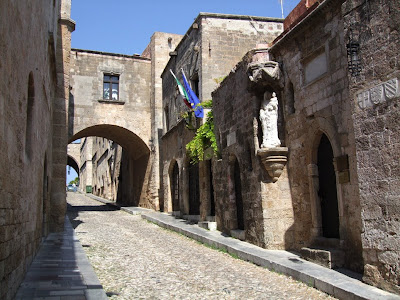 Now we return by Mouseiou Square and enter the Street of the Knights (Odos Ippoton). This was the main street in the Coliseum, and is perhaps the most outstanding medieval street to be seen anywhere in Europe. Its chief feature is the degree of its preservation and its freedom from elements of a different age. During the early years of the Turkish occupation, the barracks of the occupying forces were brought here. Later, Turkish families were installed, and they added wooden balconies to the front of the buildings, spoiling the harmony of the original architectural conception. The earlier form was later restored by Italian archaeologists. At first sight, the buildings may seem austere and plain; but even a brief walk will suffice to discover the multitude of different forms and styles of detail. The street is approximately 200 metres long and 6 metres wide, and it leads up to the Palace of the Grand Masters. To the right and left stand the Inns of the various Tongues.

As we enter the Street of the Knights, the first building on our left is the north side of the Hospital. To the right, a medieval building houses the Commercial Bank of Greece. This is followed by the Inn of the Tongue of Italy, finished in 1519 by the Italian Master Fabrizio Del Carreto, whose escutcheon can be seen in the center of the frontage. Next to this is a small palace bearing the coats-of-arms of the French Masters Aimerie d’ Amboise and Villiers d’ Isle Adam. Although it cannot be verified with any certainty, it seems that this was the residence of Villiers, the Master who defended Rhodes during the Turkish siege in 1522 and was entrusted with the grim duty of handing over the city to the Turks.

Opposite this palace is the original main entrance to the Hospital. After this, behind an iron gate, is a shady garden with a Turkish fountain, whose running water is the only sound to break the silence there. The Catalan and Aragonese style of a gateway which has survived among the ruins would seem to indicate that the building which stood there was Spanish. Almost opposite the garden is the Inn of the Tongue of France, the most highly decorated of all the Knightly buildings and among the most attractive. It is definitely worth more than just a hasty visit. It was built by the Grand Masters d’ Aubusson and d’ Amboise at the end of the 15th century or the beginning of the 16th, and bears their coats-of-arms on the front along with the emblem of the Order and the escutcheon of Villiers d’ Isle Adam.

Next to it stands the Chapel of the Tongue of France, with a Gothic statue of the Virgin and Child on its frontage. The interior of the Chapel was much changed by the Turks, who converted it into a mosque. The coat-of-arms of Grand Master Raymond Beranger (1365 – 1374 AD) on the Chapel indicates that it was built during his term of office and consequently that it is one of the oldest buildings in the Street of Knights. The chapel stands next to the residence of the priest, which is now occupied by the Italian Consulate. These three imposing French buildings bear witness to the power and influence of the French within the Order.

After this, an arch with a room above it is the entry to an alley at right angles to the Street of the Knights. We pass this, and immediately to our right is the Inn of the Tongue of Provence, with the Inn of the Tongue of Spain to the left. The room above the archway belongs to this. Both Inns were built at the beginning of the 15th century and neither is notable for any particular exterior decoration.
Posted by Intelliblog at 02:02