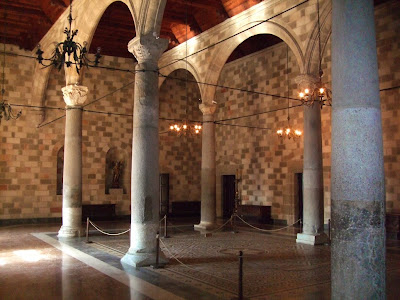 Shortly after these buildings, which are the last two Inns in the Street of the Knights, a large Gothic loggia provides a monumental end to the street. The loggia dates from the first half of the 15th century and linked the Palace of the Grand Masters and the church of St. John. The church, which was built in the early 14th century, was the official church of the Order. It was in good order until the middle of the last century, despite conversion into a mosque, but in 1856 a bolt of lightning struck the minaret and ignited a quantity of gunpowder which had lain in store probably forgotten - in its cellars for many years. The explosion blew up the church, destroyed the arcade next to it and what had remained of the abandoned Palace of the Grand Masters, killing some 800 people. Fortunately, the drawings of Rottiers had preserved the design of the church, and the Italians were able to use them to build the church of the same name at Mandraki Harbour, near the Governor's Palace, now called the Church of the Annunciation.

Opposite the Church of St. John, at the highest point of the Castle, stood the Palace of the Grand Masters, a structure imposing both for its dimensions (80 meters by 75) and for the strength of its fortifications. These were so strong that even the siege of 1522 AD hardly damaged them. During the first years of their occupation, the Turks used the Palace as a prison, after which it was allowed to fall into ruin. The final blow was dealt by the explosion which wrecked St. John's Church. However, the Italians, wishing to provide King Victor Emmanuel and Mussolini with a worthy residence when they visited the island, rebuilt it along the lines of the old building. It was finished in 1940.

The floors are notable for their marvellous mosaics, dating from the Hellenistic and Roman periods, which were brought here from the island of Kos. The statues which stand in the inner courtyard are also from the same periods. Greek archaeologists were brought to the brink of despair by the rebuilding of the palace, for there is considerable evidence that the famous ancient, temple of Helios (Sun god) lies under the foundations, with its rich decorations, and this may even have been the site of the Colossus. Excavations in depth have never been conducted in this area.

The Palace of the Grand Masters is a worthy end to one’s visit of the Old Town as it is a magnificent building and contains much interesting detail (eg. some of the windows have thin colourful alabaster panes, which are translucent) and also some wonderful old furniture and tapestries. Room after magnificent room is linked by grand corridors, there are monumental staircases, huge fireplaces, ornate ceilings, beautiful wood carvings and much to delight the eyes. Oen can quite comfortably spend several hours here, drinking in the history of the palce, which seems to pervade the air one breathes.

As we leave the palace, Kleovoulou Square lies to our right, and beyond this we enter a fine, wide street whose plane trees cast deep shadow even in the heat of the day. This is Orpheos Street, which is lined with tourist shops, bars, restaurants and tavernas. To the right, in a wall linking the interior wall of the Castle with the main wall, is the Gate of St. Anthony, and after this, if we turn to the left, the impressive d’ Amboise Gate. Iron benches between the two gates afford an opportunity to sit and rest in the shade for a while, and even - why not? - pose for a quick sketch portrait by one of the artists to be found there. If we turn the other way down Orpheos Street, we will come to the Clock Tower (built after the earthquake of 1851), which stands on the site of the northwest tower of the interior fortifications of the Coliseum. From here, the wall ran downhill parallel to the Street of the Knights to the point at which it met the outer walls near the harbour. Almost none of this section of the inner wall has survived.

By this stage, we were very tired and ready to go back to the hotel for some freshening up and packing up, ready to fly out. We had allowed an hour to get to the airport but a nasty surprise awaited us there. Our flight had been cancelled and we were to be stranded at the airport for more than 6 hours. A word of advice, if travelling with Olympic Airways, expect the unexpected, always ring up 24-48 hours before your flight to confirm it, and even then, nasty surprises are quite likely to eventuate… There was nothing we could do but leave our bags there and take a taxi to the nearest holiday town of Kremasti. Nothing much to do there except have a wander around, past the perpetually closed town library built with money donated by locals who had made their fortune in the USA (looking very grand, but never used).

We ended up sitting in a café for several hours, drinking coffee and solving hard crosswords, until it was time to go back to the airport for our night flight into Athens. We arrived at the hotel without any further untoward episodes (not that we were complaining!) and needless to say slept like logs right through till the next morning.
Posted by Intelliblog at 02:03