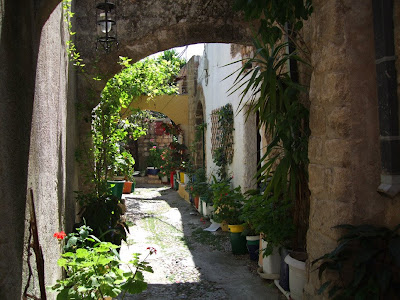 “Tradition does not mean that the living are dead, but that the dead are living.” - Gilbert K. Chesterton

On Mondays, all the Greek museums are closed and this should be something to remember as one’s plans may be thrown awry and it may happen that one misses out seeing something that one had hoped to see. We decided to have a relatively subdued day today, wandering around the Medieval Town, going in and out of shops, exploring the back alleys, talking to the locals and stopping and starting whenever we wanted to.

One should not be misled by the term "Medieval Town" into thinking that what one will see is a ruined and deserted city, such as Mystras in the Southern Peloponnese. The Old Town of Rhodes is a bustling neighborhood of some 6,000 people, who live and work in the same buildings in which the Knights of St. John lived six centuries ago. It is certainly one of the most interesting living monuments to the past in Europe, if not the world. Even the visitor whose stay in Rhodes is for no more than a few hours should not neglect to walk around the old town.
Even today, the old town is divided into the two parts which made it up in the time of the Knights: The northern part, which was the internal fortress of the Knights, known as the Castello, and which contained the official buildings; and the larger southern part, called the Chora, where the Greeks, the Europeans who were not members of the Order and the Jews lived. These two parts of the town were separated by a wall running approximately parallel to the line of Sokratous street, the old Bazaar. During the years of Turkish occupation, the Greeks were expelled from the Old Town, which was the exclusive province of Turks and Jews. Greeks were allowed to enter only during daytime and those who were caught in the old town after dark were liable to be beheaded.

The Chora begins at the top of Sokratous square, the “lug bazaar”, as the Turks used to call it. To the left is the Mosque of Suleiman (next to the clock tower), standing in a fine courtyard with plane trees. It was built in 1808 in the place of an older mosque erected in honour of the conqueror of Rhodes, Suleiman the Magnificent. It continues to operate as a mosque, despite the worrying and visibly precarious angle at which its minaret leans. The Turkish library, founded in 1794 by the Moslem Rhodian Ahmed Hafuz, is on the other side of the street. The library contains a fine collection of Turkish, Arab and Persian manuscripts, among which is an anonymous chronicle of the siege of 1522 AD. Also to be seen are two richly ornamented Korans, one of 1412 and one of 1540.

Apollonion Street leads off West from near the Suleiman Mosque. The Byzantine-Gothic church of St. George stands here, an elegant structure dating from the 15th century. It was used as a medresse (a Turkish theological school) during Ottoman occupation, and was known as Kurmale-Medresse (the school with the date palm). Walking down Sokratous street again, the first street to the right after the Turkish library (Ippodamou street) takes us straight into the heart of the old Turkish quarter, which has lost almost nothing of its medieval colour. The alleys and the houses are very much as they were in the time of the Knights: The arches beneath which the road passes every so often were added by the Turks to provide protection against earthquakes, and they add to the oriental atmosphere. To the right of the street can be seen the chapel of St. Paraskevi, in a free cruciform shape. This, too, became a mosque (Takkeci Cami) during the years of Turkish rule.

The first street to the left after the mosque (Archelaou Street) leads to Arionos Square, where stands the Sultan Mustafa Mosque, built in 1765, and the public baths. These are the old Turkish baths (hamam), which have been restored since being destroyed in the last war. The doorman tells visitors of an old Turkish custom associated with weddings: When a couple was to get married, it was the tradition that on the Friday before the wedding (which took place on Sunday) all the relatives and friends of the couple were provided with tickets for the baths, so that all could prepare themselves in a comradely atmosphere (the two sexes separately, needless to say) for the ceremony to come. A lane runs down from Arionos Square between the mosque and the baths to the outdoor Theater of the Old City, where performances of folk dancing are held every evening during the summer.
Posted by Intelliblog at 03:49